30F - Hell Train: Revolution Road (26): Boro who had stabbed Hong Danhwa tells him not to worry because the injury is not fatal although it will prevent him from moving and following Ha Yura for now. Hong Danwha then gets a flashback about Yura, who told him her reason was that people took away what was so important to her. He then asks Boro if he went to "the hidden floor". Meanwhile Daniel tells Baam about the last Slayer candidate and that this guy had taken everything away from his life. And continues by telling Baam that by accepting the bet, Baam fell into a trap.

Ran manages to pass through Mirotic but the "real" one appears, perplexing Aka Williams. Finally, Hwa Ryun, still chasing after Yura then decides to use her staff, using it as a bridge to the higher stairs and blocking the way up. But Angel appears and tells them that Daniel had sent messages to her telling to come and attack Hwa Ryun, allowing Yura to escape. Rachel is seen and the stairs to the train appear... 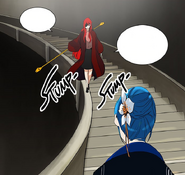 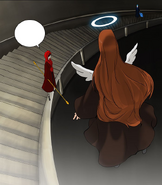 The story of the hidden floor is being revealed.


It may become an important story.
Not everything is out of the bag yet, so be patient.
Surprising stuff may occur, like someone returning.


The story’s pace has been adjusted for readers to have more time with the new characters and settings.
The story will soon take a curve, and older characters will come back.
So think of this chapter as a short stop.


The story of Rachel’s team will be revealed slowly.
They are the ‘bad guys’ for now.
Daniel is a liar with a sense of humor.
Angel is, well… a glutton.

Retrieved from "https://towerofgod.fandom.com/wiki/Vol.2_Ch.138:_30F_-_Hell_Train:_Revolution_Road_(26)?oldid=125646"
Community content is available under CC-BY-SA unless otherwise noted.