30F - Hell Train: Revolution Road (25): Baam attacks Daniel with a series of mixed skill hand-to-hand moves, knocking him backwards with the force of his strikes. Daniel dryly laughs at how Baam is able to copy techniques and Baam recounts how he trained over the past year in order to learn all the skills he possesses now.

Meanwhile Aka activates his technique "Combustion" and stops Mirotic's first attacking spear while Moontari stops the second attacking spear, allowing Ran to launch one of his Lightning Spear techniques at the exposed gatekeeper.

Elsewhere Boro is fighting with Hong Danhwa who is using his special Ignition Weapon, "Krishna", to gain a slight advantage. Danhwa reveals the history of his sword before launching heavy Ignition-augmented swings at Boro who takes the attack. Boro then reveals that he can finally "take" it now and exhibits his ability to read Krishna's movements by averting Danhwa's next strike. Boro then explains his style of martial arts before bypassing another of Danhwa's attacks and impaling the swordsman with his needle. 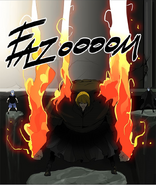 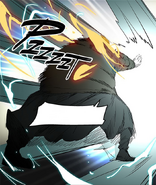 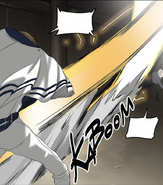 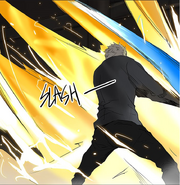 This chapter was more or less dedicated to Boro.
I don’t think many of you would like this,
He is a rather important character…
There is a complex story behind him.


As you saw in this chapter, Boro is very experienced.
His specialty is going against armed people.
So when his opponents are holding any kind of weapons, it is actually an advantage to him.
This is bad news for characters who depend on strong weapons, like Hatsu and Hong.
On the other hand, people who rely on their body or Sinsoo, like Ran, are tough for Boro.
Of course, you can’t say who is going to win until they fight,
but these things can make one better at guessing.


Hong and this new swordman guy are, like many have guessed, from the same village.
The hardcore history behind that place will be told later.
A small hint is, men going crazy over gals.
And obviously, other swords will show up.
[1]

This week, I must talk about the signing event.
I was worried about the cold I caught the day before it.


I was quite surprised at how full of people and how emotional it was.
Thanks to everyone who came to the event.
Sometimes I feel bad for not being worthy enough of the love I am given...
And I got lots of chocolate too.
Thank you all again.


The merchandise sale that people really wanted will come soon.
I was really happy about the stuff people made for Tower of God.


I always say I am happy to draw,
But that doesn’t mean it isn’t tiring.
So I sometimes want to rest.
But I guess overcoming that is the job of an author.
Tower of God is a work that needs a lot of that kind of job after all.


[Translator’s extra] Some stuff I overheard in the Fancafe on the signing event that was held:
SIU's fav male character is Baam, and female character Yuri.
If he had a choice between Rachel and Anak to marry, he'd prefer living alone. If he had to choose, it would be Rachel.
The book edition of ToG may come out next year or the year after.
The mobile game is planned for after this summer.
He tried the game too.
He likes to cook by himself.

Retrieved from "https://towerofgod.fandom.com/wiki/Vol.2_Ch.137:_30F_-_Hell_Train:_Revolution_Road_(25)?oldid=126769"
Community content is available under CC-BY-SA unless otherwise noted.