30F - Hell Train: Revolution Road (24): Daniel introduces himself to Ha Yura and Baam as Rachel's comrade. Baam questions Daniel's claim causing the latter to ask the former who he is with Baam replying that he was looking for Rachel and needed to see her. Daniel then recognised Baam as "Jyu Viole Grace" and after some chatter he challenges Baam to a match noting that if Baam won, he would give him his remote.

Meanwhile Ran, Aka and Moontari defend against Mirotic's attacks with Ran commenting that if he had a path opened up for him, he could counter-attack Mirotic and possibly get through him. With Ran's nonchalantly arrogant tone sparking Aka into following his plan, the latter flares up fire-like shinsoo around his arms as he prepared to put Ran's plan into action.

At the bottom of the stairs, Baam accepts Daniel's challenge and Yura races off up the stairs with Hwa Ryun chasing behind her. Baam and Daniel's fight begins with the two exchanging blows before Daniel begins to overwhelm Baam. Daniel relaxes and says Baam is weaker than he expected but Baam retaliates by first using Daniel's own attacks against him and then launching a tirade of mixed skill hand-to-hand moves. 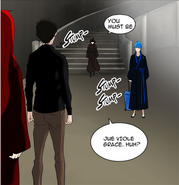 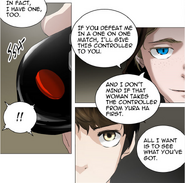 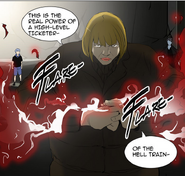 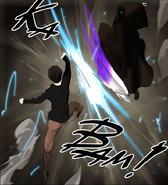 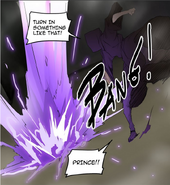 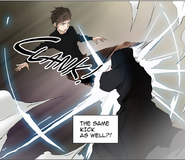 My child is different.

This chapter is full of action.
Next chapter will be similar again.

Baam and Daniel both are kind of lightweight, so they fight based on skills rather than weight.
Daniel’s actual skills will be for later…

Baam has grown quite much indeed.
I like him since such steps are very clearly seen.

Old ticketers such as Boro and Aka have their own ways to survive.
Using my head to show such unique points.

The characters that people are asking for will reappear soon.
I hope you’ll be interested in the newer characters too, though.
Thanks, and be happy!

Retrieved from "https://towerofgod.fandom.com/wiki/Vol.2_Ch.136:_30F_-_Hell_Train:_Revolution_Road_(24)?oldid=151520"
Community content is available under CC-BY-SA unless otherwise noted.