30F - Hell Train: Revolution Road (23): Rachel hears a loud noise coming from downstairs, so Daniel decides to go and have a look, knowing that there may be someone trying to get in the way of their plans.

Baam and company begin fending off Mirotic's attacks and, after finding a path due to Hwa Ryun's powers, he and the red-haired Guide pass right through the guardian and continue chasing Ha Yura. As the duo begin to catch up with Yura, her teammate who accompanied her decides to confront Baam in order to give Yura time so she can escape but eventually Boro faces him instead (having been thrown past Mirotic by Aka).

Baam and Hwa Ryun then catch up to Yura with Baam knocking Yura down from behind. As Baam orders Yura to hand over both the remote and her Express Ticket, Daniel appears and introduces himself as Rachel's comrade and Yura's collaborator. 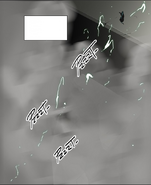 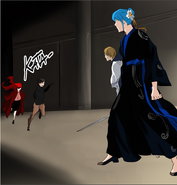 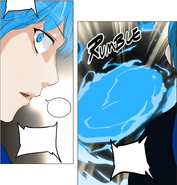 The candy man and Baam have finally met.


I will have a signing event soon.
I used to think that I wasn’t big enough for such things..
But many have been disappointed by that…
So I think I will do one in Seoul…
It makes me nervous..


I have stomach problems again.
Well… it doesn’t seem to be life-threatening at least.
I was able to finish this week’s work too.
I’m fine now.
A bit tired though.
I slept longer.


I will update the blog with some posts on settings soon.


Aka isn’t female.
His story will come out later, as it has to do with the Train..


Next week will be loud, with many action scenes.
I’m currently cutting some parts, since many didn’t like the side stories,
so they have to be set for later.


Be careful of what you eat, and stay healthy~
[1]

Retrieved from "https://towerofgod.fandom.com/wiki/Vol.2_Ch.135:_30F_-_Hell_Train:_Revolution_Road_(23)?oldid=126767"
Community content is available under CC-BY-SA unless otherwise noted.