30F - Hell Train: Revolution Road (21): Hwa Ryun offers to guide the Regulars through the emergency exit, but also says that they should form a new team so as not to arouse suspicion amongst the remaining teams in the tournament.

While the tournament continues, with Team Royal and Team H playing, Rak is angry at being excluded from the team that will enter the maze that is the emergency exit and, while talking to Hanool, a mysterious person appears.

As the group, including Baam, Boro, Aka, Moontari and Ran, is lead by Hwa Ryun through the maze, Baam asks Boro how he knows Aka. Boro responds that they were teammates when they were on the Hell Train before but Aka says that they aren't friends. Aka then says he is trying his best to get on the train and also reveals that hopes to find "her" again... Dan and Xia Xia also collaborate with Hwa Ryun in paving the way through the maze, while Beta handles Ha Yura's fans that are blocking the elevator, but soon realises the elevator is broken and will not work. 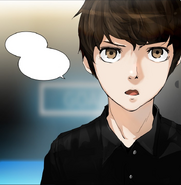 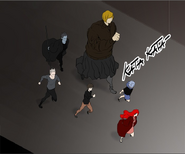 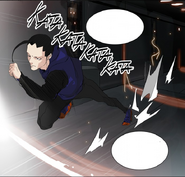 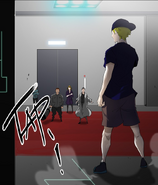 Well… The train showed up.
Bigger than people have guessed.
Or not.

This arc has some references/homages to Galaxy Express 999.
Wiki link for the curious: Galaxy Express 999
It was a great influence when I was planning Tower of God.
The theme of riding a train to look for someone is definitely from there.

By now, Tower of God seems to have gone very far from that anime.
But tropes such as:
Using various characters’ backgrounds.
Telling the story of the main character’s growth step by step.
The mixture of many worlds.
those are still left.

The mysterious person in this chapter will be shown later…
The next few chapters will focus on the battle against Team Rachel,
and the test part will be shown bit by bit.

It seems a cold has spread widely,
so I went to the hospital to check.
Well, I have caught enteritis…
So that was already the 2nd time this year that I needed medical assistance.
Thankfully I already finished drawing the chapter.
Maybe it’s all because I am in my thirties now…?

I hope none of you get sick!

Retrieved from "https://towerofgod.fandom.com/wiki/Vol.2_Ch.133:_30F_-_Hell_Train:_Revolution_Road_(21)?oldid=151517"
Community content is available under CC-BY-SA unless otherwise noted.