30F - Hell Train: Revolution Road (20): After giving a show of power, Moontari tells Ran to get lost since he is not currently strong enough. He then provokes Ran when mentions killing Khun Family members on the train which causes Ran to angrily lash out, much to Dan's disagreement.

Down on the field of play, Ha Yura explains to Baam that everything up to this point was a trap to keep everyone on this floor, so that her allies could steal the train. Hanool then points out that if no-one could leave the floor, neither could she, but Yura retorts and promptly vanishes, to everyone's great surprise.
With Baam's group wondering where she had gone, Ran and Moontari crash down on to the field of play with Ran in a beaten state. Baam asks why he is attacking Ran and Moontari replies that they had a quarrel and then politely asks if Baam could move so his team could finish their match quickly. This comment provokes Ran further and Moontari threatens to really take him down with Baam readying to jump in to help Ran. As Moontari readies to take them both on, Boro interrupts them and says that they have to deal with the problem of them being stuck in a trap. Baam corroborates Boro's words and adds what their intentions are. When asked where Ha Yura went, Baam replies that she escaped via her suitcase.
Aka suddenly arrives and asks if what was said was all true and Baam confirms that it is. Aka attempts to put across the point that the guardian would stop them but Baam tells him that FUG were involved, with the news visibly irritating Aka in response. They ask Yura's team if they knew anything, which they didn't, and Aka decides to investigate Yura's suitcase.

As they are teleported to another location, Ha Yura's teammate asks if it was okay to leave them all to which she replies it didn't matter and her bag couldn't transport everyone anyway. She then tells him they should get moving, before the train left.

After Aka's "investigation", Boro tells him that they all needed to work together to stop the train from taking off, to which Aka agrees. Aka then says that something not quite right was going on with Baam but Ran interrupts coldly telling him that if he didn't want to co-operate he didn't have to and that he would finish them off immediately before leaving. However Dan tells him to stop as everything that had been said seemed to be true. Also Xia Xia and Beta had snuck into the control centre and had seen Rachel and Cassano together on the Entrance floor cameras. Ran is visibly shocked as he tries to work everything out. Boro then says they have no time to waste and asks Aka if he knows an alternative way out, which he replies that he does but it was like a maze and would almost be impossible to find the way out. Hwa Ryun then appears and says she will lead the way.

Going through the Entrance floor gate and seeing a set of spiralling stairs going upwards, Rachel's group are then greeted by a mechanical bird-like creature that says it is the navigator that will lead them to the train that is on top of the stairs. 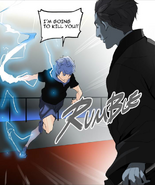 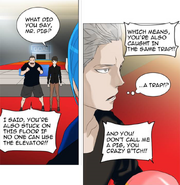 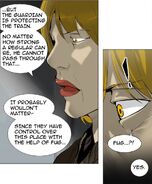 It dawns for Aka 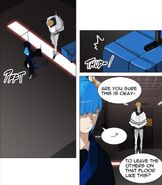 The navigator that will lead them to the train

Happy New year!
This would be the first blogpost of the new year.
I hope everyone will have a great 2015!

Next week’s story will be about the enraged party against Rachel.
How did this happen?
I hope you will enjoy reading it

And the Train will come out soon.

In addition, we will inform you of the event winners who will receive the 2015 New Year's Gift.
[Poster giveaway event winner list]