30F - Hell Train: Revolution Road (19): The chapter begins with Daniel's duel with Mirotic. His teammate comments that his attack has only power but no plan. Although Daniel's attack has no effect on the guardian he succeeds in blocking Mirotic's attack. The fact that he is able to do so comes as a shock to his team. When questioned by his teammate on whether or not he had a plan to get rid of Mirotic, he replies by explaining the nature of the illusionary guardian saying that no physical attacks work on it. Not really having the question answered, Cassano asks him again how he plans on killing the guardian, an invincible illusionary being. Daniel replies by simply stating that Cassano's left arm is capable of killing an illusionary being.

He then proceeds to hurl another attack at Mirotic this time using a lot more power "worth 94 people". But his attacks abruptly stops midway, and the guardian is nowhere to be seen.

Daniel then reveals that he had only just "turned off" Mirotic guardian illusion by using the Mirotic Remote Control that was given to him by the new conductor of the Hell Express and never had the intention to kill the guardian himself. His attacks had only been an act for his own amusement.

The chapter ends with the opening of the real platform of the Hell Train.

Rachel with an eerie grin 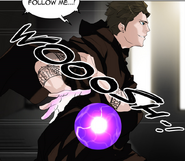 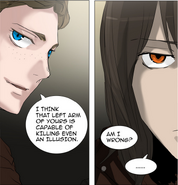 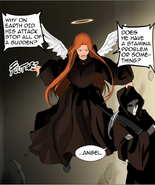 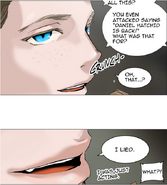 The gate to the real platform of the Hell Train opens

And the door is said to open next year.

We wish for a good end to this year and a happy New Year!


It is New Year soon.
It is a bit early, but I hope everyone will have a happy New Year ^^

As an inexperienced author, it’s shameful to admit this, but deadlines are hard… Very hard…
Especially when one does 80+ panels per week, each week is like a war.
And even to this day, posting a new chapter makes my heart race...
For once, I would like to congratulate myself for one year worth of work!
[Insert clapping sound here]

At the very last, the door opens.
Soon the main story will begin.
[Translator’s note: You have been saying that for freaking forever!]
Because there were many characters in the introduction, it took a long time to set down the
foundation for the big storylines.
But the main character has finally moved too.

About Daniel, he was made to be playful and talks weirdly from the start.
Like calling himself an old man…
Of what he says, you have to make sure what is true and what isn’t.

Hopefully both Tower of God and I can return with a fresh restart and continue on.

Sorry for not being able to give the best of the best every time,
But I hope 2015 will be a year when I keep lots of promises and do not get sick.
Thanks very much again.