30F - Hell Train: Revolution Road (16): As Ran and Novick discuss Baam's clear route to victory with Hwa Ryun, Dan messages Ran telling him that he has found Aka Williams. With that information, Ran and Novick get going leaving Hwa Ryun to notice that a problem may have occurred down on the field of play.

The other Regulars watching are impressed by Baam's skills and Rak and Boro wonder why Baam has such a blank look on his face. A provoked Baam screams to know where Rachel is but Ha Yura patronizingly tells him to concentrate on the tournament before then revealing how she met Rachel via Emile. Yura then offers Baam a bet with their Tickets and information on Rachel on the line. Hanool Kang audibly tells Baam not to accept but, with Yura goading him, Baam confidently accepts the bet.
The next round of the game starts and Ha Yura drives towards Baam, yellow ball in hand, and Baam attempts to freeze her using Fast Skip but Yura bypasses his technique to everyone's surprise. Pierre begins boasting about Ha Yura's power to Baam but Yura throws him the yellow ball as it goes into Crazy Mode; the yellow ball releases an incredible burst of energy completely eradicating Pierre and Yura teases that she now had three Tickets. Ha Yura then offers Baam another bet with the same conditions as the previous bet and Hanool once more tells him not to accept it as it was an obvious trap. However Baam tells Hanool to trust him, as he would get past Ha Yura. 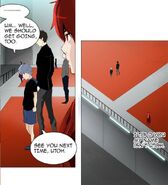 Ran and Novick leaving Hwa Ryun to return to their mission 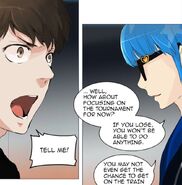 Baam screaming for Yura to tell him where Rachel is

Yura detailing a little of her history 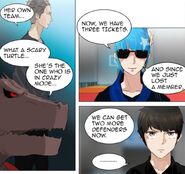 Sacrificing a member to bring another two on 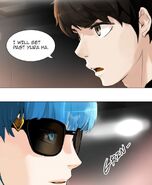 The weather is getting colder every day.
Please take care and watch out against catching a cold.


This game clearly shows the difference between attacking and defending,
so the turn change seems obvious.
For some readers, it might not be their cup of tea.
But I like sports comics, so I kind of like this.
But still, I wish to know what could have been improved and to work on it more.


Yura would be… not really violent, but just uncaring.
I thought that would be someone with too much popularity?
What would someone do after getting one’s wish granted?


Although her specs are good, it isn’t the original Ha style as with Yuri.
More hints about the Family will come out later.


Next chapter, the game vs Yura will be close to ending,
and an important turn of events is awaiting.


It seems I will spend New Year’s day drawing again.
[1]

Retrieved from "https://towerofgod.fandom.com/wiki/Vol.2_Ch.128:_30F_-_Hell_Train:_Revolution_Road_(16)?oldid=107744"
Community content is available under CC-BY-SA unless otherwise noted.