30F - Hell Train: Revolution Road (15): The game, "The Crazy Yellow Ball", is set up and Baam wonders who Ha Yura is and how she knows his identity. The rules of the game are explained, with Hanool Kang likening it to rugby, and Boro muses that the rules seem advantageous for their team but notes that Baam is acting weird after meeting Yura.
Watching from the sides, Hwa Ryun thinks similar thoughts as Boro regarding the game when Ran and Novick appear with the former asking the Guide what she was planning this time.

With both teams set up, Boro suspiciously wonders what Ha Yura is planning with her formation considering her number of Tickets. The game finally starts with the yellow ball being shot high into the air and Baam very quickly retrieving it. Yura doesn't move, but Baam and Hanool start their forward charge after Baam passes the ball to him. As Pierre readies to stop Hanool, Baam tells him to pass the ball back, which he does. With Baam in possession of the ball, he freezes Pierre and skips past him before dropping the ball, having advanced two spaces. Boro is among the people who admire Baam's skill and Ran says that the match will end with no fun. On the field of play, Yura congratulates Baam, the "former Slayer candidate", but tells him that the Tickets will still become hers. Baam asks her how she knows such information and she nonchalantly replies that Rachel told her, leaving Baam immensely surprised and also accusing her of being affiliated with FUG. Ha Yura then offers Baam a bet: if he could block her next attack then she would give up her Ticket and tell him where Rachel is. 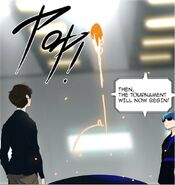 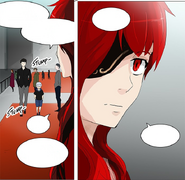 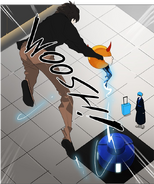 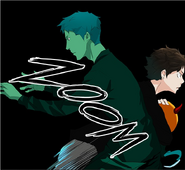 Baam uses Fast Skip
Add a photo to this gallery

There was a design festival with a Webtoon corner. Festival Pictures Webtoon Festival
I was unable to go, but I hope those who did enjoyed it.


We plan for the merchandise shown there to be sold later, so keep an eye out for them.
I regret not being able to participate more.


This new game’s rules are a bit like American football.
The Crazy Mode will spice it up, and I plan to show it next chapter.


I planned this to be a short and simple test.
I thought about balancing the teams with different numbers of tickets and strategies coming from it.


What makes Defender and Keeper different is that Defender can’t grab the ball and must stop the
opposite team’s member, meaning making a person hold it for more than 10 seconds until it goes Crazy.
Keeper, on the other hand, takes it away.
If Defender takes the ball, the mode activates.
Many people dislike me ranting about rules in the Webtoon,
so I try to show it instead of telling.


Next week, some information about Yura and Rachel will be revealed,
and the game will get more extreme.
Please stay tuned for Baam vs Yura.


I made a wish to the first snow of the year.
It feels bittersweet that this will be my last winter in my 20s.
[1]

Retrieved from "https://towerofgod.fandom.com/wiki/Vol.2_Ch.127:_30F_-_Hell_Train:_Revolution_Road_(15)?oldid=126759"
Community content is available under CC-BY-SA unless otherwise noted.