30F - Hell Train: Revolution Road (14): With the match lists generated and visible to all, Hana Yu is excited to be facing Ha Yura in the first round whilst Baam notices that Ran is present from his team being in the tournament.

Elsewhere Ran wonders who Aka is and Beta notices that Baam is present, but Ran tells him to focus on their mission of finding Cassano. As they discuss their plan of action, Xia Xia notes Yura's name and remembers hearing her name earlier (where we then see a suspicious Ran). Xia Xia checks Ha Yura out but can find nothing other than that she is from the Ha Family and an Idol. They chit-chat a little and Ran mentally muses on how much Viole had become before telling everyone to start looking for Aka.

The first match of the Train City Tournament, between Baam's team and Yura's team, begins with the robot explaining the rules of the Crazy Yellow Ball Game. Boro shares his dislike of the game and the fact that they were facing someone from one of the 10 Great Families but Rak confidently says there is nothing to be afraid of. On Yura's team, she rallies her group by telling them they will never lose as long as she is on their side. In the waiting room, Hwa Ryun and Boro discuss the participating teams and talk tactics, noting most of all that they should be most wary of Ha Yura as the outcome of the match will be decided on how strong she is.

Finally, ten minutes later, the first match begins with the two opposing sides on the playing field. The two team leaders are called to the centre table and Yura greets Baam by calling him "Jyu Viole Grace", shocking him. As the game, "Crazy Yellow Ball Game", begins, Baam wonders how Ha Yura knows his identity.

Baam's team in the waiting room 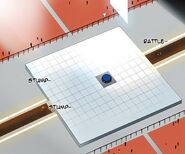 -Looking for someone to help with the work.
We would appreciate it if you could check the blog for more details-

Today’s post was easy to make thanks to Naver’s phone-friendly service.

The game starts now.
While Ha Yura is a quite confusing character, this makes her fun to draw.
I’m thinking of changing her clothes often later.
She will be quite important next week and onward.

The train City’s story is mainly about a somewhat awkward Baam versus Rachel,
But I hope you enjoy other stuff too.
Not only Yura, Aka will also have an interesting story shown.

Of course, Baam and the others will have their own time to shine.
Be prepared please.

As for many people who are looking for Khun…
Don’t be angry... It’s not as if I killed him off screen...
I plan to simplify focus for a while starting from the next chapter.
The fun point will be how Baam changed over a year.