30F - Hell Train: Revolution Road (13): Emile, through a message, informs that the tournament starts to get Tickets to board the Hell Train.

Hwa Ryun asks Boro about his previous encounter with FUG and he reveals that he encountered someone calling himself a Slayer candidate who killed almost all Regulars on the train except for five of them, him included. He also explains that the Slayer candidate is trying to recover something that he left on the train, so he will become a very powerful enemy.

Baam receives a message informing him that Khun will arrive the next day and Hwa Ryun also tells Baam what happened to Boro with FUG. Boro explains that despite this experience, he can barely remember anything, but he is sure that the Slayer candidate will return to reclaim what is his, though he is willing to find it to avenge his fallen allies.

Rachel's group talks about the tournament and what they plan to do, especially Daniel who is very excited about the start of the Hell Train.

The day of the tournament, Yura's allies are blocking the gateway to the test, but they are rapidly eliminated by the Ran's group who have just entered the room. Soon after, the list of tournament is released, where Team Baam will face Team Yura and Team Ran will face Team Aka. 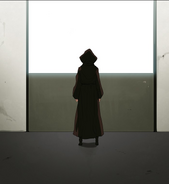 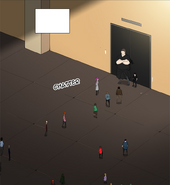 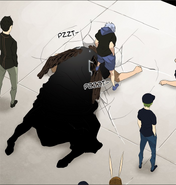 Ran beat up the reguler to get onto elevator. 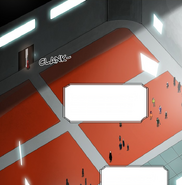 Chaotic drawn match. And where did Rachel go?

The game starts now.
It seems the start of the Season [I know it’s the middle of S2, but this is what SIU says] is
getting too confusing to follow.
It is a hard problem.
I will try to make it simpler and more exciting.
Since my body condition isn’t really good,
I have been switching between rest and work lately.
So final touches and editing have been weak.
Those problems will be dealt with.
To all students who finished Seunung (Korean SAT), congratulations.
Bye, and see you later.