30F - Hell Train: Revolution Road (10): The chapter begins with Rachel’s group getting off their train, before they encounter the same elevator Baam and Ran's groups had encountered previously. After that, Rachel’s team starts to discuss which floor to go with Angel saying she’s hungry and another member telling her that she’s always hungry. She replies that she’s not always like, to which he retorts again, before then she asks Cassano his opinion about which floor they should go. Cassano replies it doesn’t matter to him as long as he gets on the Hell Train and achieves his goals. She calls him a boring guy and then tells him that to do that they should get some Tickets first. The guy asks where "Grandpa" is and the girl says she can’t contact him but she can ask Emile but Rachel tells her not to as he will come on his own before the tournament starts. The girl then asks about another girl that they were suppose to meet and Rachel says that she has arrived too before pressing a button on the elevator.

On the Entrance floor, Ran's teammates start to worry whether Ran had died after taking a shot from the guardian with Beta saying he has too much pride. Beta decides to go in but Novick tells him to wait and look, when they see Ran, holding an electric spear, in smoky clouds as if he had dodged the guardian’s attack. Ran then thinks about how he progressed and that he will not turn his back disgracefully again, whether it was Anak or Cassano that he won’t let them slip by, he then throws his spear and lands, wondering if his attack had worked. To his surprise, the guardian remains unmoved from his position and seems to prepare another attack that is stronger than his previous attack. As Ran and the others remain shocked, the guardian releases his attack and Ran decides to counter it with a technique he didn't want to use but is suddenly interrupted by another man with spiked hair. The mysterious guy says he didn't want to use this technique, since it was worth three people, and then proceeds to absorb the guardian’s attack. Ran and the others are shocked and the guy says to Ran and the others that he was surprised to see someone pick a fight with the "Mirotic guardian" as soon as they arrived, then says that there's a good amount of promising rookies in this year.

On the Residence floor, Baam and his group enter into Hwa Ryun's residence room with Boro telling Hanool to put a still injured Felix down. Hana Yu begins to love the residence and Boro mutters how even if a few years had passed, the residence hadn't changed much. Hwa Ryun questions him that it sounded like he had been here before and Boro replies this was his third time on Hell Train. He then asks Hwa Ryun if she’s the one that works with FUG and and how he has many questions to ask regarding this tournament but Hwa Ryun tells him she’ll answer his questions later as something is now about to happen; they have arrived and will start the game soon. Baam and the others are surprised when the phone in the room starts to ring and someone talks through it, announcing a new game. 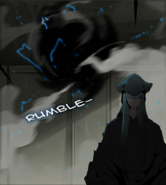 Ran through his spear. 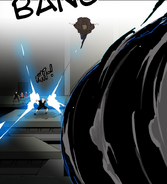 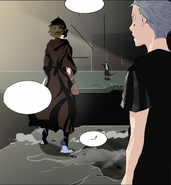 Team baam enter their room.
Add a photo to this gallery

[1]It's past 12!
(translator's note: SIU is usually ON POINT about uploading the latest issue at midnight so that people can read it as soon as it's Monday)
This issue we saw Ran's.... hard to say action, but some pew pew! fight scenes.
Ran will be a character that will grow quite a bit from his current D-rank so I have great expectations for him.

From the next issue, the game will begin in earnest.
There will also be some light shed on the Entrance and its gatekeeper,
and so begins the story of Train City.

I've been a bit flustered due to a changed work environment but I think I've started to get accustomed to it.
New stories, backgrounds, characters and...

A lot of people are asking about Koon.
Hmm... he'll be figuring prominently lol.
Do not worry.

And so... things are looking to get a lot busier starting next week.
Thank you for reading this week and be careful not to catch a cold.

Retrieved from "https://towerofgod.fandom.com/wiki/Vol.2_Ch.122:_30F_-_Hell_Train:_Revolution_Road_(10)?oldid=126754"
Community content is available under CC-BY-SA unless otherwise noted.