30F - Hell Train: Revolution Road (9): Baam remembers Hwa Ryun's talk about finding expendable teammates during the elevator ride. Baam and his new teammates arrive at the Residence floor and notice it's filled with other Regulars who, as Boro explains, are waiting for a Ticket Holder in order to steal their Express Ticket and enter a room, subsequently warning them that everyone here is their enemy. Boro continues his explanation on how the room doors function and how it affects Ticket Holders and their allies. They head towards the room Baam's friends are staying in but are interrupted by a blue-skinned Regular asking them if they had a ticket and, if they are not the main, to serve under "Sir Aka", as he may take them aboard the Hell Train. Boro intervenes, telling him to stop bothering his teammates and get lost. The blue-skinned guy recognizes him and apologizes, wishing them a safe trip to their rooms. After being questioned, Boro answers he does know Aka a little and that he is extremely greedy and dangerous. As they head over to their room they are glanced by Ha Yura without noticing. Arriving at room 52, before contacting Baam's friends, they are attacked by a group of Regulars trying to steal their tickets.

In the meantime Dan and Beta are having a chat about the reason Ran is fighting. Beta says Ran is enjoying himself a lot and hogging all the fun for himself whilst Dan states that he wants to finish everything by himself to spare his team the strength they will need for the tournament. Beta decides not to join the fight because his target is Cassano not the guardian and Dan, observing Ran, is thinking about him trying to take full responsibility as this is his first assignment from Khun AA. Ran tells the guardian to turn around and face him, also stating he is going to make him use the rest of his spears. The guardian calls Ran a newbie who just became a D-rank Regular knowing nothing and that the door will not open now, nor that he will use the rest of his spears because only one will be enough. The guardian throws an enhanced spear at Ran who is urged to dodge it by Novick.

Back in front of the room 52 everyone is surprised at Baam's martial arts as he knocks out five E-rank Regulars in an instant, making the 3 others run away out of fear. His team realizes that he is extremely strong and Boro thinks that he has seen that kind of martial arts before. Coming out of the room with Hwa Ryun, Rak mentions Baam is late, brought troublesome teammates and, as always, is too soft-hearted. He then greets him saying "Long time no see, black turtle".

Another train arrives at the Train City entrance with Rachel's group, including Cassano, 3 others and herself, disembarking from it. 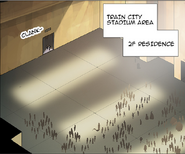 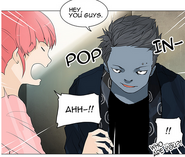 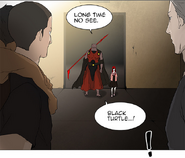 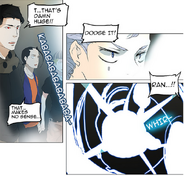 One spear is all that is needed... 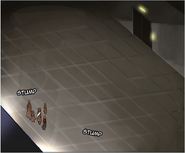 Licking her lips...
Add a photo to this gallery

Where to go? Result.

Episode 121 of Part 2.
In hindsight, I realized this was the 200th comic.
But I totally neglected this since I never really put an emphasis on this kind of stuff ㅠ ㅠ
I should pay closer attention.
I'll try to put in work so that there will be an episode 300 or 400 in future...

I had planned to have a lot more combat scenes with Ran...
but due to the other parts taking a lot longer than expected I failed...
ah, the wonders of Webtoon where everything changes as you draw it out...

Finally the "team of interest" has arrived in Train City.
Next week will continue the fight between Ran and the gatekeeper.
Other sides of the story will proceed as well, so please look forward to it.
It's raining quite a bit today so take care of yourselves.
See you next week.
Thank you^^

Retrieved from "https://towerofgod.fandom.com/wiki/Vol.2_Ch.121:_30F_-_Hell_Train:_Revolution_Road_(9)?oldid=151494"
Community content is available under CC-BY-SA unless otherwise noted.