30F - Hell Train: Revolution Road (8): The chapter begins where it left off last chapter, Twenty-Fifth Baam and his new team begin to ride the elevator, but the elevator starts to move slowly with Boro saying the reason is because it has a delay for every floor and it will take time even for going to the 2nd floor. Then, Felix's condition starts to get worse and Boro tells her to hang in there. He then asks Baam if his friends might have gone to the Entrance but Baam says they wouldn't have gone to the wrong way, Boro starts to suspect his words and asks if his friend is perhaps a Guide or something, but Baam avoids his question. Hana Yu then asks Boro the reason they wouldn't go to the Entrance floor and Boro says that there will be a gatekeeper there and he will probably be guarding it till tomorrow.

In the meantime Team Novick has reached the Entrance floor where they encounter a strange man that looks like a humanoid lizard. He is sitting and seems to be guarding a strange door and the group start to worry and argue about what he is or if he's strong, but the gatekeeper interrupts their argument and asks them to return to where they come from and wait since it is not time yet for this door to open. Ran bluntly refuses him and the gatekeeper decides to eliminate them all as he begins to prepare an attack.

Baam and the others are still in the elevator and Boro begins to discuss with Baam about FUG and how secretive they are. He asks Baam what relationship he has with FUG, whether they were his former teammates in the past or something. Baam says yes, then Boro asks him the reason he wants to start something up with them again instead of staying hidden and Baam replies that he has many things left in FUG and hopes for everything to get resolved in this year's Hell Express. After that Baam remembers his flashback with Hwa Ryun where he asked her why he would have to make another team since his team was already enough with Hwa Ryun telling him that he had teammates to protect but not teammates to abandon in a battle. She finally told him to find teammates or else a very good amount of his teammates may die this time.

Back on the Entrance floor, the gatekeeper is still preparing his attack and Ran says to him even if that door can only be open at a certain time he still will not leave since he is annoyed by him and must remove him first. The gatekeeper starts firing spear-like beams but Xia Xia blocks them most of them. After that they all see Ran, Redan technique activated, further on saying he didn't want to over do it but has changed his mind since he wants to know what's behind the door. 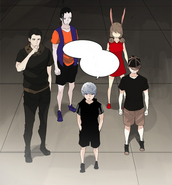 Team Novick at the entrance. 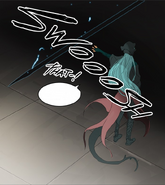 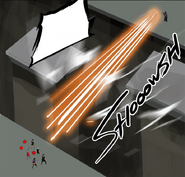 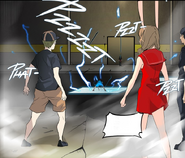 The game is coming and Ran is…

Hello, it is SIU.

This post is a bit late. Sorry. TT
I had some personal problem last week, and next week is military practice!
Being an adult is hard.

Forced to be totally focused in working now.
These days I am getting a bit distracted.
And new characters and events seem to require long pace for introduction.
But now most of it is settled, so I can use action and story next week.

Tournament is main in Train City but considering later stories I hesitate going straight in.
Next chapter will have Ran's action.
I like him because he is small.
Also he seems strong.

Discounting some wrist problem, seems my schedule seems to be settling down.
Even though I can not grant all readers' wishes,
I always think how to give better comic.
Author finding who he seems to be important,
and I think I am middle of doing that.

Thanks for cheering me up, and see you next week.