30F - Hell Train: Revolution Road (7): Felix, who was unconscious, starts to regain her consciousness and sees Boro, Hanool Kang and other unfamiliar faces. She asks Boro with a confusing look what's happening and Boro fills her in on the situation before telling her that she can't come with them because of her injury. She agrees with him and says she's aware of her condition, but the train stewardess that was with them tells her they will give her an Express Ticket if they get more. Boro tries to make a fun of her statement and then asks what her real name is, which she reveals to be Hana Yu and that her dream is to become an idol. Afterwards she talks a bit about her dream and that she's looking forward to meet Ha Yura in Train City, but Boro tells her in order to see Ha Yura first they have to pass through one final barrier and that one of them may even die in the process. After that, the train finally reaches its destination, Train City station, and they all get off and quickly encounter an strange elevator.

Novick's team, who also got off their train, are standing in front of an elevator that seems to be similar. The elevator has many buttons with floor names on it: 1st floor - Entrance, 2nd floor - Residence, 3rd floor - Restaurant, 4th floor - Stadium, 5th floor - Control Centre, 6th floor - Skyscraper. Beta and Xia Xia then start to argue about which floor to go with Xia Xia suggesting they should go to the residence first in order to get some rest and prepare for themselves. However, Beta refuses and says they should find Cassano, whilst Ran gets annoyed and presses a random floor: 1st floor - Entrance.

Baam and the others are also wondering which floor to go. Baam suggests the residence floor since his friends might be waiting for him there and Boro agrees with him. Someone else suggests 1st floor - Entrance but Boro refuses and says they shouldn't go there yet, because there are incredible guardians waiting for them there. He then presses the 2nd floor - Residence button. 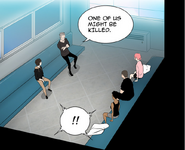 The tone gets serious...

I'm back from China.
I think we'll be seeing a few familiar faces next week.
I am always thankful.[1]

Hello, its SIU.
I've been to Guangzhou and back again safely.
I was gone for 4 days but since I live in suburban/rural area,
the time spent travelling is closer to 5 days.

It was fascinating to see that people knew me in China,
and since I was going as a cultural representative of Webtoons in general,
I was pretty nervous.
In any case, we successfully concluded the signing event and think that it was a meaningful time overall.

I think that going abroad,
regardless of whether its a temporary hiatus or not,
requires a period of getting re-adjusted.
Almost like you've gone and visited an entirely different world and back.
Due to this, I've tried to squeeze in some drawing while I was in China.
Problems arose when my laptop started malfunctioning
(maybe due to the long distance travelled)
and I had to stay up at night trying to fix it.

As a result, I barely got to do any sight seeing in China.
I have no regrets, however, as the purpose of the trip itself was important.

Sometimes I wonder what I would be like if there was no Tower of God the Webtoon.
I think to myself, "Maybe I would be nothing"
All of a sudden this comic has become this huge presence in my life.
Same goes to you readers as well.
You have my thanks for always cheering me on.
I will return next week with an even greater episode.
Have a nice day! ^^