30F - The Hell Train: Revolution Road (6): This is the ninetieth chapter of Volume 2 of Tower of God.

The chapter starts off with Boro saying he'd never heard of a person named Rachel before, then Baam tells him that it was because she had just become a D-rank and was an E-rank not long ago. Boro is surprised and asks how she would conquer the train if she just levelled up to a D-rank so soon and adds it would even be hard for her to get a Ticket for herself, but Baam tells him FUG is backing her and it is possible. Boro is shocked hearing FUG and wonders why would FUG be interested in the Hell Train again. Boro then accepts Baam's offer and decides to make a team with him but he asks Baam to let him choose the members on his side and Baam accepts. Boro recruits the train stewardess that was there, since Felix was injured, and also Hanool Kang. They then all set out to get the Express Tickets Boro mentioned were in the other section.

On the way, Boro asks Baam how he found out all of this about Emile, Rachel, and FUG and Baam tells him that one of his teammates is an associate of FUG. We then see a flashback of Hwa Ryun congratulating Baam on becoming a D-rank and telling him Khun and the others had already made it and became a D-rank before then explaining to him the path he should be taking. She said, in a couple of months from now, there would be a tournament in Train City where Express Tickets would be on the line, and there was an important member of FUG assigned to Train City; she added that she was sure they would try anything to capture him there, and there was a chance of Karaka appearing on Hell Train this year as well as Rachel. Baam was shocked after hearing Rachel's name and asked why she would be there. Hwa Ryun said she might be there as a bait to capture him or that maybe she misses him before then telling him to gather teammates to join the tournament with as they will be waiting for him at Train City.

Back in the present, Boro, Baam, and the others reach the other section and they see two Regulars surrounding Felix, who's still unconscious. Kang yells at them to get away from her and Boro tells Baam that those Regulars are the ones who have the Tickets. He then asks Kang to get the Tickets from them and prove that he's worthy to be a Ticket Holder, Kang is petrified but then decides to attack them; unfortunately, he gets beaten very quickly leaving Baam and Boro surprised. Boro asks Baam if it would be alright with teammates as weak as him but Baam replies it was fine and that he only needs numbers. He goes on to tell Boro to handle the other Regulars and leave the FUG Regulars to him, surprising Boro about Baam's confidence. Boro agrees, then they all head out to Train City.

In another Private train, there is an announcement about the upcoming tournament made by Kerros who reveals himself to be the Test Administrator of the Hell Train this year, then we see Ha Yura with an Express Ticket and a picture of Baam.

Hanool and the train stewardess being picked 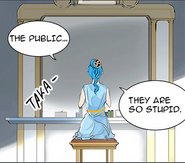 Picture of Baam
Add a photo to this gallery

I cut it off at an awkward point, so the chapter was shorter.
The preparations are over. Next chapter, the Train City arc will begin.
Don't you think Khun will appear soon? Thank you _ _

Until today, preparations were made for the main story.
I feel that since it's a new story,
the preparations may have been a bit long.

I was actually considering diving right into it today,
but I thought that it might be awkward without the material covered today,
so I ended up doing it this way.

Since it's the main story starting next week,
I think that the story will reveal and be more focused.

The Hell Express is a long arc,
so I have no plans to rush it.

I'm planning to steadily increase the emphasis on battle scenes as well,
and as I foreshadow various things,
I think it will be fun for you to spot them.

Thank you for coming in today,
and see you next week ^^

Retrieved from "https://towerofgod.fandom.com/wiki/Vol.2_Ch.118:_30F_-_Hell_Train:_Revolution_Road_(6)?oldid=146444"
Community content is available under CC-BY-SA unless otherwise noted.