30F - The Hell Train: Revolution Road (5): Twenty-Fifth Baam, the mysterious person from the previous chapter, asks Boro if he had an Express Ticket as he was looking for people to join him in the tournament. Boro is confused and asks Baam what he was talking about to which Baam replies by showing Boro the message about a tournament that Emile had announced to everyone. Boro recognises the device as the thing the "Ticket Hunter" had used but doesn't know what it does. Baam explains Emile's function and Boro asks him why they should join him at the tournament but Baam replies that it was because they were getting on the Hell Express and if "they" weren't stopped everyone aboard it would die.

In the private train that Novick's team is in, Dan argues against going to the tournament as it was an obvious trap but Ran says that they would go anyway. Xia Xia then gets a message from Khun saying that their team would be a day late, something that was unlike Khun. Ran says they should concentrate on their own task first and, as Beta and Ran have another small dispute, Dan tells Novick that something didn't feel right as the person behind Emile felt dangerous for some reason. Just then an announcement informing that they would be arriving at Train City soon sounds out and Novick's team get ready to go.

Baam continues to explain that "they" needed to be stopped before "they" got all the Express Tickets as "their" plan was to first seize all the Express Tickets and then seize the train. Boro muses that Baam didn't know anything about the Hell Express either and then asks him who "they" were. Baam answers that it was the person behind Emile, his long time friend that may now be his enemy: Rachel.

On another private train headed for Train City, a strange cloaked Regular walks over a row of meticulously lined up corpses whilst counting each one that they stepped on. Upon reaching the number 98, the cloaked Regular comes up to a cowering Regular and calls him the "99th" before mercilessly killing him and sighing that he never gets an even number. The cloaked Regular then gets a call on his Pocket and he converses with the person on the other end for a moment before cutting off the call. As the announcement informing that the train would be arriving at Train City soon blares out the Regular says with a small chuckle that the tournament would be fun. 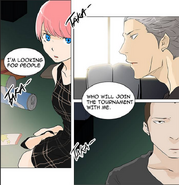 The people Baam is looking to recruit

Khun A.A messaging that he will be late 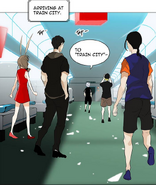 Baam telling of his nemesis

Rachel's plans to steal all the Tickets

The cloaked Regular is one person short...

This train is bound for Train City.

It's been a while, this is SIU. ^^
Many of you seemed worried that I hadn't been posting things on my blog.
Nothing serious is going on, but I've been quite busy. ㅠㅠ

First of all, I moved.
Much of my surroundings have changed.
I needed some time to get accustomed to my changed body and new situation,
and above all else, I think I wasn't very emotionally stable.
(GoDai: I don't think this is to suggest that he's been emotionally unstable;
the word "안정" just happens to mean "stable, calm, relieved, at rest")

At times like this, it is difficult to work 100%,
and working at all can be a bad thing.
I think I underestimated it too much.
It was quite harder than expected, haha.

Anyway, I think it's a part of becoming an adult.
Regardless of where this is leading,
I'm in a rather comfortable state right now.
It was actually very tiring because it was my first chuseok holiday since becoming independent, though.
Even this week, I was often behind and had to pull all-nighters;;;

Starting next chapter, the central plot of this arc will slowly unravel itself.
Should I say that it's the beginning of the story...
I think I'll be able to actually work with a clear head now.

Then please enjoy the next chapter,
and starting next week, I'll be writing afterwords like before. ^^