30F - The Hell Train: Revolution Road (4): The chapter opens where it left off with Boro wondering what the device the blue-skinned Regular was using was. Picking it up he notes the program on the screen and is astonished when he realises that it had led the Regular to him. He then reads an announcement that Emile had posted when Hanool Kang suddenly bursts in and asks if he is okay. Hanool then explains that there was someone strange in the other carriage and the two go back to see how it could be.

Elsewhere, on another private train for Regulars, a Regular calls Ran a monster for killing everyone aboard the carriage but Ran bluntly retorts that they all attacked him first when they saw he had an Express Ticket. Ran then finishes the Regular off, saying he likes the train. Beta then comes into his carriage and Ran asks him how it went on his side with Beta replying that he'd taken care of it all. Beta then grills Ran with questions on Cassano but Ran coolly rebuffs him. The rest of their team arrives and Ran asks them if they found any more Express Tickets but Novick replies that they hadn't. Ran goes on to say that encountering Cassano's team was more important and that the latter was up to something since Emile was back online. Xia Xia then notes that Emile had released an announcement about a tournament and wonders if it was a trap before asking what they should do. Ran nonchalantly replies that they would join the tournament regardless.

Boro nervously asks the strange person who they were and the person replies with a question, asking if they had an Express Ticket. He then says that he was looking for people to join him in the tournament. 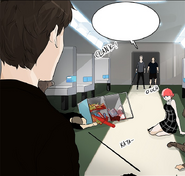 Slowly, the mood for a match...
I hope you all have a happy Chuseok holiday~~

(SIU hasn't published a blog post for this chapter.)

Retrieved from "https://towerofgod.fandom.com/wiki/Vol.2_Ch.116:_30F_-_Hell_Train:_Revolution_Road_(4)?oldid=125668"
Community content is available under CC-BY-SA unless otherwise noted.