30F - Hell Train: Revolution Road (3): Boro silently observes the "Ticket Hunter", the blue-skinned Regular who is confidently showing off the two Express Tickets he had managed to take. Boro notes that it was an unfortunate situation, especially since he was looking after two rookies, and he tells Hanool to go get him a drink as "his throat was really dry". Understanding the message, Hanool darts off whilst Boro silently hopes that the blue-skinned guy hadn't noticed.

The blue-skinned Regular quickly becomes aware of the Tickets Boro possesses and launches an attack towards the latter with his needle, with Boro managing to parry the strike with his own needle. Boro incredulously asks the Ticket Hunter how he had knowledge of his tickets as they had yet to board the Hell Express and were lacking any identification but the blue-skinned Regular dodges the question.

Boro then warns Felix to stay away as their opponent was dangerous, with the blue-skinned Regular agreeing before attacking with a shinsu-enhanced swing that destroys part of the train carriage, knocking out Felix and slightly damaging Boro.

Boro then asks the blue-skinned Regular what the numbers were on the Express Tickets and, after finding out the answer and then hearing the Regular's aspirations, Boro mentally chastises the blue-skinned guy's ignorance of the Hell Express before engaging him in combat. Parrying and blocking the Regular's blows, Boro draws in close and nonchalantly bisects him at the hips, killing the Regular instantly. As Boro acknowledges his acquisition of two extra Express Tickets, he suddenly notices that the dead Regular had been using Emile prior to dying. 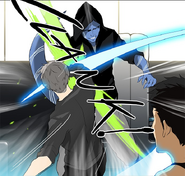 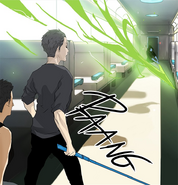 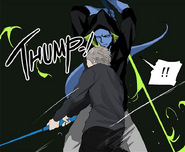 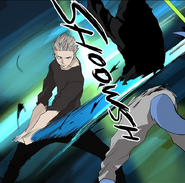