30F - Hell Train: Revolution Road (1): Repellista Zahard is playing a game and having fun when Alumik Edrok comes in and tells her that she should go to bed to which Repellista responds by saying she wants to stay up late tonight because she is on vacation. Alumik then proceeds in saying that the animals that usually make a lot of noise with their cries are calm and that it meant there may be an amazing guest coming before telling Repellista to not play too many games and go to sleep. She then says that games are always fun.

The scene moves to Ha Yuri Zahard and Evan Edrok confronting members of the Royal Guards. Yuri then wonders how the Royal Guards knew she would be here with Evan, the latter saying they shouldn't have come because Repellista won't tell her anything before wondering why Yuri would get her hopes up. Yuri tells him to shut up and then says that Repellista called for her even though her message had been vague. Evan replies that Repellista is just messing with her but an annoyed Yuri tells him to stop acting like he knows it all.

Evan then says that Yuri was higher in rank than the Royal Guards so if she tells them to leave they can't refuse. Yuri then tells them to leave but they respond by raising their weapons against her. This irritates Yuri and she promptly proceeds to beat them before appearing before Repellista.

Meanwhile, Evan converses with Alumik asking why he would use a dead boy as bait and where he was planning to take the Princess. Back in Repellista's room, Yuri tells her sister that she could have at least done the favour she had asked for since she completed Repellista's favour of getting the baby Zygaena flower. After some chat Repellista hands Yuri a Ticket for the Hell Express, telling her it was hard to get. Yuri replies that she can't even get on since she isn't a D-rank Regular but Repellista tells her she would end up boarding the Train because the boy she is looking for will be on that Train in a year from now. 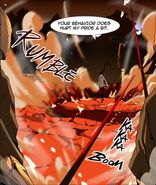 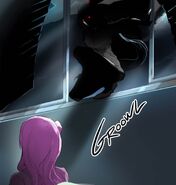 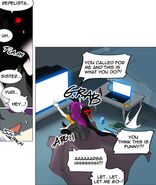 *[Service Manager] <The Tower of God> was delayed until next week on the 18th due to personal circumstances. Thank you for your understanding.

This is a bit late, but here’s the blog post.
It’s been long time since Yuri last showed up.
Lots of you people wanted to see her.

Yuri is actually supposed to be the main focus for much later on, in the Princess arc.
So only glimpse of her have been shown, and hints about her provided,
without revealing much information.
However, along wih Maschenny, the two princesses will show up much more later.

I was unsure about how to cut this chapter.
The story mood needed to be freshened up,
so I went for Yuri and Repellista.
However, it’s feel empty if it were too long, and unappealing if it were too short.

So after much consideration, I cut off some parts at the end.
Instead of putting in too much at once, I decided to to focus on one thing at a time.

So Yuri now definitely knows that Baam is alive.
Baam and Yuri’s relationship will have important part in this Webtoon.

Thanks for reading, and stay tuned for different story beginning next week.