30F - Epilogue (3): The chapter starts back at the welcoming scene of Rachel. She pursues by asking how Cassano's mission went. He answers it went well, although he couldn't bring his comrade with him. As he explains it, Traveller thinks to himself how suspicious and dangerous Rachel seems. Michael then steps out of the hooded group, asking Cassano to show them in order to confirm the success of his mission. The living Ignition Weapon then proceeds by showing the red high compression container, to the relief of the hooded crowd, and prompting Rachel to declare: "Let's save the Tower!".

3 days later at the Wolhaiksong's resort, the teams of Regulars and Rankers are having a nice barbeque party and chat. Watching over this cheerful scene, Koon expresses some disappointment that it had to end soon. Baam agrees, but says it's okay since they're going to meet again later in the D-ranks, of which Rak agrees to hope they'll all be stronger. The Gator then says they should get rid of the "useless blue turtle" and starts arguing with Koon, both looking touched by the ambient happiness and behaving as if their team never separated. Enjoying the view, Baam suddenly asks when would they meet Urek Mazino. Koon answers that he's not coming, that his informant said he should be coming soon, but as the person giving the information wasn't really reliable, they shouldn't count on it. Baam then asks if Urek is such an amazing person, to which an amazed Koon says he is such a monster that even his own father recognises his strength. He then says that even though they finally received the Wing Tree token from Leesoo, it's a good thing they didn't meet him and asks why would Baam want to meet him again. The Irregular answers: "I just want to hear stories about places outside of the Tower".

Goseng then comes out and calls Viole and Koon as she had something to show them. Horyang is still in a coma from his previous fight and, as Sophia explains, it is because Cassano somehow succeeded in stealing his "demon". As a living Ignition Weapon with now one "perfect demon", Beta says Cassano is probably stronger than him and also wonders how he got hold of a technology more sophisticated than the one they used at the Workshop. A discussion with Wangnan sets their minds: they have to find Cassano in order to save Horyang. They think of using Emile as their first choice, but Beta says she is now silent, to which Sophia adds that she no more is under the illusion of being human and could, therefore, ignite; which would probably bring dire consequences. As the members regroup and discuss the complexity of the situation, Baam asks Koon if they should ask "the one that came out of the White Heavenly Mirror", to which Koon, pissed, comments that they have no other choice.

Hwa Ryun greets her "visitors", with a remark about all of them being men. As she knew already what was their intention, she wonders why she should help them as she was imprisoned when she helped them. Koon proposes her a deal, if she tells them where Cassano is, she can come with them. She then does her job and reveals that the place where they can meet Cassano is the "Hell Train" on the 35th Floor. As the 35th Floor is still a little far away, it worries Wangnan, but Koon adds that it would only take a year and a half to get there if they pass all the tests without failing. He then hopes that Horyang would hold on until then. As they are leaving, Hwa Ryun calls Viole and comments that he looks happy just as Jinsung wanted, and she shares a message from the latter, imposing to Viole to grow stronger to protect his happiness, to overcome his enemies that are powerful and coming, and to avenge his misery when he was not happy.

As Team Leesoo is taking a suspendship to their next destination, all the Rankers and Regulars are chatting in a bittersweet mood, Koon and Hatsu fight again just like they did when they first met. They then say their goodbyes. The chapter ends with Hwa Ryun's thoughts as a teaser for next season:

"It looks like everything has been taken care of. But soon... a new story shall begin. She's someone you can neither guide nor control. Just like you, a different existence withing the Tower. Someone who can change the destiny of the Tower. If you manage to stand in front of her again... Baam, what would... you choose?"

Traveller gets a strange vibe from Rachel...

The sadness of leaving everyone again 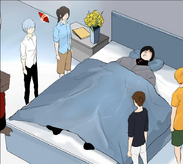 Horyang stuck in a comatose condition

Cassano with the complete 'Devil' 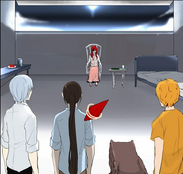 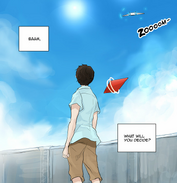 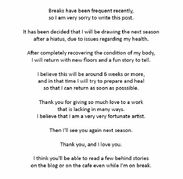 SIU's message
Add a photo to this gallery

Hello, this is SIU.
I'm sorry to say this again despite the recent breaks I've already taken.
I have decided that there will be a hiatus before the next season for health reasons.
Once I've recovered completely, it will return with a new story and a new Floor.
Although we're planning for 6 weeks right now,
I will try to get better and return earlier if I can.
Thank you for being loyal to the series.
I consider myself a truly lucky artist for having this kind of amazing audience.
I will see you again when the next season begins.
Thank you. I love you guys.

P.S.
Even during the hiatus,
you can still check out the back story of many of the characters.

Extra
It’s a shame, but I will rest well and return.
Thank You.

Finally, the long long Workshop Battle and Epilogue are over.
I actually had planned to continue for a bit longer,
but due to several circumstances including my wrist’s condition,
I decided to cut it short slightly sooner.
That why the cuts got all elaborate and the content
and length of chapters became increased at the end ^^.
The stories that were not finished in this Epilogue
will probably be included in the beginning of the next arc as a recollection.
Of course,
I’ll have to get started on the work to know the exact details.

This Afterword is a bit long, so I’ve numbered the points.

1.
The E-rank Workshop Battle is over,
but another Workshop Battle could be include in the story.
After the characters have climbed up quite a bit
and the relationships between them have been established,
it might appear about one more time with special items on the line ^^

2.
The reason that Quant and Hwa Ryum gave different explanations of the Hell Express
will be explained in the next arc.
It is not a miscalculation,
but rather different ways of saying almost the same thing.

3.
For an easy telling of the story,
the rate at which the current Regulars are climbing the Tower
is slightly higher than the original setting.
In terms of the storyline, I must consider the events after their Regulars days,
so I would appreciated it if you kept this in mind as you continue reading.
I can’t completely break the setting either,
so there could be a long timeskip in the later parts of the story.

4.
In this Workshop Battle and its Epilogue,
the Part II characters had less screen time than usual,
but the Part II characters (like Yeon and Prince) will continue to stay with Baam in the next arc,
so I don’t think there’ll be anything to worry about from here.
I think we’ll be seen frequent bickering within the team.
However, it looks like it’ll be difficult to see much of Goseng and Horyang from here.

5.
The next arc, as many of you are expecting,
will be the Hell Express arc.
The game will take place both inside and outside the express train,
and although the scale is smaller than the Workshop Battle,
the travel distance and map is long,
and I think it’ll be faster and have more action and game-like qualities.
One very powerful enemy will also appear.
I’m also considering a match between the Mad Dog and Viole later on.

6.
I’ve also prepared a Zahard Princess arc.
However, I think it might run a little later than expected.

7.
The reason that Beta said Cassano could be stronger than Viole
is because Viole still has room for growth.
Cassano has an almost-complete power.
You can check the power of the complete Cassano next time...

8.
Starting next Monday, I will begin to post gossip.
They say that it’s not possible for me to chat on the café.
I’ll find a different way, haha.

If I remember anything later, I’ll add it ^^

With the regards to the condition of my wrist,
a major hospital recommended that I recovery without surgery so I have decided to do that.
I’ve heard that it can get better if I equip an orthosis for a while.
Of course, it’s a matter that can only can decided after some rest,
but I think that other than being slightly uncomfortable, it turned out great.
Thanks to that, the hiatus has been greatly shortened.

During the running of the series,
I’ve decline all paid offers such a subcontracts and advertisement due to my wrist.
I held on, thinking that I should be responsible for this arc no matter what,
and although it was tough, I personally felt prouder than ever.
I got seriously depressed around the middle,
but it’s all good and I’m very happy now that it’s over.
Indeed, we must keep our bodies strong.

After I get healthy, I shall return with more fun story,
as a complete artist who works hard and makes money.

It’ll be a long time,
but I’d appreciate it if you thought of it as investment for a better work,
and wait for me.

P.s.
If you’re wondering about something please leave a comment.
I’ll pick a few and answer them during the Hiatus.

Retrieved from "https://towerofgod.fandom.com/wiki/Vol.2_Ch.110:_30F_-_Epilogue_(3)?oldid=107725"
Community content is available under CC-BY-SA unless otherwise noted.