20F - Bath (2): This is the tenth chapter of Volume 2 of Tower of God. It follows the Regulars as in goes towards evening, and then night, but their sleep is disturbed by the new game.

A tense encounter with Viole and Wangnan is interrupted by the arrival of Prince, who's complaining as usual. Viole returns the ring, advising him to keep it safe since it seems 'important' to Wangnan.

Akraptor and Horyang encounter Miseng and a middle aged female Regular, who is acting friendly towards the young girl. Akraptor gets irritated with her and tells her to leave. Miseng starts to cry and Goseng, who appears in the meantime with Horyang, attempts to console Miseng at which point Wangnan and Nia appear, wanting to play cards.

As Prince follows Viole to his room (601), complaining about being ignored, Viole enters his room without responding. Prince then meets Yihwa outside the room; he is shocked that they are sharing a room, but she tells him to mind his own business, to which Prince rages and makes up his mind to destroy both Viole and Yihwa.

When Yihwa enters her room and asks if Viole will change rooms, he replies with a negative. She tries to make it clear that while she is grateful for being released from her debt to Prince, she will not allow Viole to make any claims on her since they are together. As Viole makes it clear that he has no interest in making any claim on her body, Yihwa becomes enraged.

The card game played in pairs quickly makes the other Regulars realise that Horyang is a poor player, as his wing appendage tells everyone what he is thinking. Akraptor wants a new partner to replace Horyang. Goseng gets Miseng to join in, she quickly softens her attitude as she dominates the game while helping Akraptor. The two get along much better than before.

Wangnan, Akraptor, Horyang and Goseng all gather on the balcony and Goseng muses about what it would be like to just live their lives peacefully, forgetting all about climbing the Tower.

As the night has fallen, the Regulars have retired to their rooms. In Wangnan and Nia's room (101) Wangnan is considering Goseng's words and suggests that he and Nia should get together for a celebration meal after they pass. Suddenly, the 'remote' seen earlier starts making noise; it is revealed to be a communicator, through which Love announces the start of the new game. The doors to the corridor are locked and Love tells Viole to get down to the bathroom for a fight. 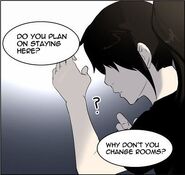 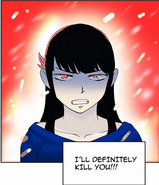 Thing just got real
Add a photo to this gallery

The test is called "A Trustworty Room".
The exact rules will be revealed next chapter.
So, please look forward to it, T.T

The game Wangnan and co. were playing is similar to Korea's Gostop.
One who collects all the cards and lives the longest wins.
I don't even know the exact rules.
It's just a game.

Hmm... starting next chapter, the volume of content will decrease.
Except the pacing of the story will be quicker, so I don't think the ratings will go down.

Retrieved from "https://towerofgod.fandom.com/wiki/Vol.2_Ch.10:_20F_–_Bath_(2)?oldid=149002"
Community content is available under CC-BY-SA unless otherwise noted.