30F - Closure (11): The crowd, Io and Punk look at the battlefield in confusion as they wonder why Androssi was there, whilst the latter notes Varagarv's durability. Elsewhere, Madoraco notices Reflejo's defeat and bids him farewell.

In the cavern, Viole looks at Reflejo's defeated form while Khun surmises the Thorn's power. A defeated Reflejo reminisces about the time he lost his eyes, before telling the three that they would all die with him, along with his dreams, when the solution would be poured. Just then, a man in purple tips the container holding the solution from above.

Meanwhile Hatsu threatens Varagarv to forfeit the match as he holds Ron Mei hostage. Ron Mei nervously questions whether Hatsu was the kind of character who preferred a fair match, but Hatsu replies that it was fair; both sides now had a hostage. Ron Mei concedes defeat, but tells them they should be worrying about Baam's condition instead.

Back in the cavern, Reflejo reveals that everything, including his own death, had been decided. Khun relays their rescue of Hwa Ryun's to Leesoo and tells him that they were caught in a trap. Yihwa and Akraptor are frustrated that they hadn't found even one of the hostages yet, until Xia Xia appears and tells the two that she would show them where the hostages were.

The news of the hostages' locations reach Khun, but they hit a problem due to the officials noticing them and Bon Bon suddenly not working. Khun worries what to do and Androssi tells them to stay alive.

In the escape ship, Quant complains that they should leave, but Lero-Ro tells him to be patient and wait. Suddenly Lero-Ro notices, in horror, that the solution was being poured...

The crowd in confusion as they wonder why Androssi was there 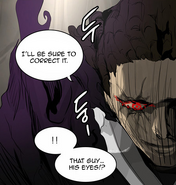 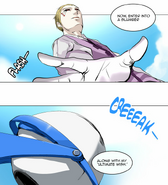 Bon Bon is not working 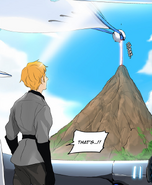 The melting begins
Add a photo to this gallery

You were surprised by the suddenly-blooming cherry blossoms, right?
I was, too, haha.
Weather suddenly got better, so it'd be ideal to get outside.

As the characters of Part II meet those of Part I,
there's a little confusion over Viole(Baam)'s name and what to call him,
but I will try to sort that out afterwards.
If not, then... whatever...

I personally tend to think that if the character Ho from Part I had more power and had grown,
he could have become a character like Reflejo.
From here on, rather than focusing on personal grudge or envy,
I plan to frequently deal with the relationships between those with power and authority,
so I guess... Reflejo is a sort of last boss in this department ('2)... haha.

With regards to Princesses of Zahard,
a Princess who is a direct descendent of one of the 10 House Heads is especially influential and powerful.
As you can probably tell with Androssi at the moment,
being a Princess of Zahard is an incredible position,
and if a Princess is from one of the 10 Families,
she will become the central power of that Family in the future,
so this is even more incredible.

Much information about the Princesses will be revealed next arc,
so I will say the rest then.

Then please enjoy this new warm weather to your heart's content,
and have a nice week.
Thank you ^^

Retrieved from "https://towerofgod.fandom.com/wiki/Vol.2_Ch.105:_30F_-_Closure_(11)?oldid=149263"
Community content is available under CC-BY-SA unless otherwise noted.