30F - Closure (10): Koon and Reflejo look on as Baam stands with the awakened Thorn. After Rak confirms his status, Baam resumes his fight with Reflejo with the latter wondering if something had changed about him.

Back in the Archimedes all of the escaping travellers have been caught and Io and Punk want to restart the tournament as quickly as possible. Suddenly they see Bon Bon in action in the distance and wonder what Androssi is doing, as Madoraco silently looks on.

Back in the cavern, Reflejo reminisces about the time Poken granted him a part of his shadow, before proceeding to assault Baam with another even more powerful shadow attack. With the nature of the attack leaving Baam no time to dodge, he stops it and delivers an attack of his own, much to Reflejo's great surprise and confusion. Koon reasons that the Thorn must be the cause for Baam's attacks to now be working.

Baam tells Koon they should finish the fight soon while Reflejo reminisces once more. Reflejo then tells Baam that he cannot accept the Thorn choosing him as its master as he is not their god. Baam agrees that he is not their god and then launches into a final attack, aided up by Koon and Rak. With Reflejo being overwhelmed, Baam lands the finishing blow, just as Androssi does the same in her fight with the Mad Dog, leaving only Reflejo's broken off mask behind... 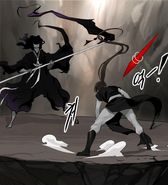 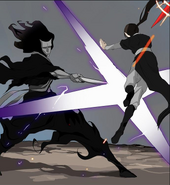 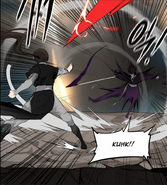 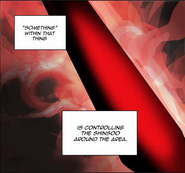 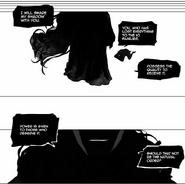 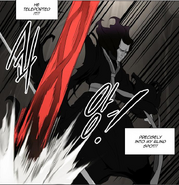 Reflejo being attacked with Mad Shocker

Baam delivering the final blow!
Add a photo to this gallery

I apologize for inevitably taking a break.
Recommended by the doctor, the week was set aside for rest more than treatment,
and to be honest, my heart felt extremely heavy while I wasn't working.
The reason the hiatus alert got up there later then expected
was because I still hadn't decided whether to draw a chapter or not by then.
I apologize once again.

To tell you about the Thorn,
I want to say that its full function has not been utilized yet,
and that its versatility depends greatly on the user.
I honestly am not a fan of main characters that have deus ex machina roles,
and there is almost no chance for such events to occur in the Tower of God universe,
so I plan to leave the Thorn as a 'growing weapon' as well.
Of course its power will explode when it needs to explode ^^
It is undeniable that the Thorn does possess fairly overpowered capabilities.

The fight between Mad Dog and Androssi has not quite ended.
The current goal is rescue and escape (and date),
so in terms of the story battle scenes such as intense clashes feel slightly awkward.
Of course showing such a side is the virtue of a sonyun (shōnen) manhwa haha.
I think it's a difficult issue in many ways.

Then please look forward to next week,
and I hope you enjoy much of your day in the spring weather.
Thank you. ^^

Retrieved from "https://towerofgod.fandom.com/wiki/Vol.2_Ch.104:_30F_-_Closure_(10)?oldid=126736"
Community content is available under CC-BY-SA unless otherwise noted.