30F - Closure (9): Khun stabs Hwa Ryun, much to Reflejo and Rak's shock. However this is merely a ruse as Khun had used the item he got from the first game, the White Heavenly Mirror, to seal Hwa Ryun inside its mirror-like blade by stabbing her in the heart. Annoyed, Reflejo launches Death Moon Shadow to take out Khun and Rak, but his attack is intercepted from below.

Meanwhile Xia Xia is stuck in a dilemma over her current predicament: tell Viole about what was going on or continue on her task of protecting her hostage. Suddenly she hears the voices of Yihwa and Quaetro calling out to Horyang.

Elsewhere, Androssi and Hatsu continue to face off with Varagarv and Ron Mei. After some consideration for the situation at hand, Hatsu tells Androssi that they need to change tactics with the former brandishing his "new sword". Androssi questions his sudden change from putting the team first and Hatsu confirms that it was for the team, after what FUG had done to Baam. It cuts to a flashback to when Androssi first found out the truth of Baam's disappearance and Rachel's betrayal from Yihwa and Rak. With new resolve Androssi launches herself at the FUG duo with Hatsu covering her by launching his signature attack on Varagarv to eradicate his Shadow Wolves. Androssi follows up by teleporting herself and Varagarv high up into the air, then taunts the Mad Dog about whether he would survive a fall from such a height after taking a hit. She smirks as she prepares to strike him down.

Back in the cavern, Khun and Rak look down in concern at Baam's condition. Khun notices that something is different with Reflejo immediately realising as well. As the smoke clears, Baam can be seen with his Thorn awakened.

Sealed inside the White Heavenly Mirror 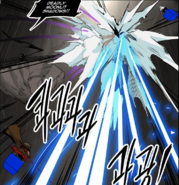 Reflejo's attack intercepted by an attack from below... 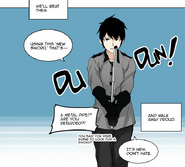 When Androssi realised how Baam had been betrayed 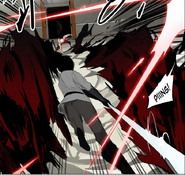 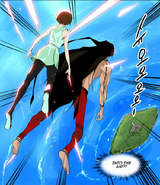 Who will survive the drop? 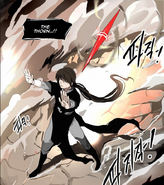 The released Thorn!
Add a photo to this gallery

For the first time in a while,
I write the Afterword on the day the chapter is released.

These days, the story is progressing at a slightly slow tempo,
but it's hard to suddenly shift gears,
so I decided to keep that speed just until this arc ends.
And I also had some health issues.
This is almost over, so I don't think it'll matter too much;;

I said a while ago that I'd want the White Heavenly Mirror and Bon Bon,
and I think this chapter would've helped you see why, haha.
The WHM was designed to be given to Khun from the start.
The other two abilities will be revealed later on,
so I hope you stay interested in those, as well.

I believe some of you may think that the travel range of Bon Bon is too wide,
but due to the increasing shinsu pressure on higher Floors,
this range is gonna be reduced accordingly.
On top of that, it can not be used effectively if there is a good Light Bearer or Wave Controller on the enemy's side.
(Ron Mei's Lighthouse was already broken here.)

I have a medical check-up this week,
so I'm not sure if there'll be a chapter next week.
If there's a break, I'll let everyone know ahead of time...

On last week's afterword, I congratulated you on starting school,
showed up at my old school to meet freshmen and got an amazing response from everyone.
Sorry, I think I've been away from school for too long, keke.

Then please enjoy the upcoming week.
I hope it's a good one.

Retrieved from "https://towerofgod.fandom.com/wiki/Vol.2_Ch.103:_30F_-_Closure_(9)?oldid=149256"
Community content is available under CC-BY-SA unless otherwise noted.