30F - Closure (8): Just as Cassano opens the door to Emile's location, Traveller enquires who he is. Cassano commends Traveller for getting so far and reveals that he came to free Emile. He continues by telling Traveller that he may as well see Emile's true identity and goes on to explain the truth behind Emile's history, much to Traveller's shock. As Cassano leaves with Emile, he tells Traveller that he will use Emile's power to change the the Tower.

The scene cuts to an incapacitated Horyang, who has a flashback to when he was ambushed by Cassano and Reflejo. He was asked by Cassano to join him, but he refused saying he can no longer live for himself anymore. With that Cassano bids him farewell. Back in the present a pair of bunny ears pop up at Horyang's location.

Meanwhile, in the cavern that held the Thorn, Khun finishes discussing with Rak on how to stop Reflejo after discovering that Mad Shocker was actually a throwing spear. Reflejo is glad that the Thorn did not activate and waits for the dissolving solution, promised by Madoraco, to drop into the area. Suddenly Khun and Rak enact their plan with Rak launching Mad Shocker at Reflejo. The attack catches Reflejo off guard allowing Khun to teleport behind him, via his Lighthouse, where he proceeds to seemingly stab the hostage, greatly surprising both Rak and Reflejo. Viole's Thorn is then seen be unravelling... 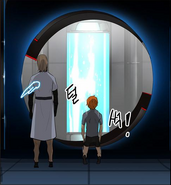 Khun and Rak vs Reflejo 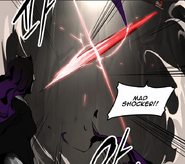 The Mad Shocker is launched at Reflejo 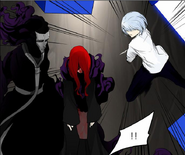 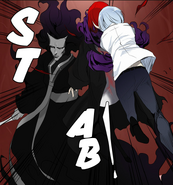 The Thorn unravelling
Add a photo to this gallery

My blog management is a mess.
Sorry T-T T-T

I feel like I'm always writing not-so-good news
or depressing stories on my blog,
so I've decided to just say "I'll try better next time~" on those days ^^;;

This chapter was split into two parts,
with different content in each.
I suppose that could have made it difficult to understand.

To be honest, when I was drawing Cassano's part,
I found it difficult because he wasn't someone the protagonist had to save or defeat,
but instead entered and left this story arc with completely different thoughts and goals...
He was a different character in the realm of sonyim (shounen) manhwa
It's a plot device needed for later, but I still wish it was more natural...
or perhaps I should have been more extreme...
I have these regrets.
Emile's power will reappear with an important role later on.

There are about 3~4 chapters remaining in the Workshop Battle.
There's not much left, so I'll try my best, haha.
The winner of the final match,
and the fate of the Rankers observing them will both be decided soon.
Then please look forward to it,
and thank you for reading this week ^^

P.s.
Congratulations to those of you who have started a new school year.
I also paid school a visit today, and freshmen were everywhere, keke.
The age difference has become so great that it's even awkward to buy them lunch, keke.

Retrieved from "https://towerofgod.fandom.com/wiki/Vol.2_Ch.102:_30F_-_Closure_(8)?oldid=153094"
Community content is available under CC-BY-SA unless otherwise noted.