watch 03:07
Wiki Targeted (Entertainment)
Do you like this video?
Play Sound

30F - Closure (6): As Viole and Reflejo square off each other, Khun notes that Reflejo's form has changed, and Rak comments that he's smoking black, like charcoal. Khun was wondering where Reflejo's confidence came from, but as expected he had a trick up his sleeve. He notes that the situation could be especially dangerous since Reflejo has a hostage. Viole tells Reflejo that he didn't have to go so far if he was only using Hwa Ryun as bait, but Reflejo retorts that he merely "educated her a little bit". He goes on to say that he doesn't know what would happen if she doesn't receive medical attention soon, much to Viole's shock. Viole exclaims that Reflejo planned to kill Hwa Ryun from the beginning and this one replies that they should proceed with the "final match".

Androssi manages to escape Varagarv's attack using Bon Bon, despite Ron Mei's Lighthouse field. However, it is revealed that Varagarv has obtained the Blood Tamara, which can render his body invulnerable. Hatsu believes that this puts the Mad Dog on par with Androssi and begins to doubt in her victory.

Reflejo begins his attack, creating a massive weapon using black shinsu and destroying much of the cavern. Khun notes Reflejo's power and the latter replies that he's a fragment of Poken's "shadow", of whom Viole says he's a FUG operative. Reflejo continues, revealing that he's been hiding for thousands of years and that by breaking the rules and using the fragment's power, it makes him more powerful than a B-Rank Regular. Reflejo then proposes to Viole to give up, with the promise to show him where the hostages are, of which Viole refuses. Viole and Rak prove initially unable to get past Reflejo's defences, but when Khun distracts him with a Lighthouse field, Viole is able to get behind him near Hwa Ryun, exclaiming that he will take her with him. Reflejo, turning to face him, tells him to go ahead and try... 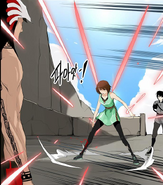 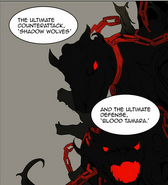 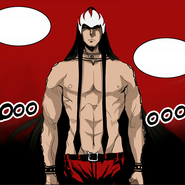 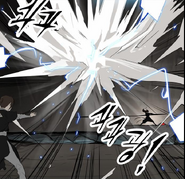 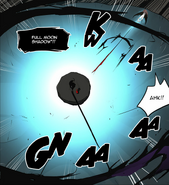 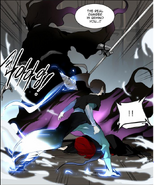 Viole flanking Reflejo
Add a photo to this gallery

Part II has reached chapter 100.
Thank you.
I never thought I would be able to keep drawing Tower of God for this long,
but all of a sudden, I find myself having drawn it for over three years.
I think having consistently drawn for this long alone is enough to be proud of, haha.

To be honest, I worry a lot about the lengths of chapters these days.
Mm, I think it’s a problem that appears as manhwa goes long-term.
It’s difficult.

I’m receiving a lot of questions about Reflejo’s identity,
but there’s a big difference between the abilities of an E-rank and a B-rank.
As there is a top 5 in E-rank, there are also strong individuals in the D and C-ranks,
and a B-rank is a Regular who has transcended such individuals.
More will be revealed about Reflejo’s abilities next chapter,
so please wait one more week ^^

The Mad Dog’s Blood Tamara is indeed a fairly overpowered item,
but I think it’s best to see as an item that goes well with him.

Bon Bon’s transportation ability is only limited by distance and weight,
and is quite free overall.
The problem is that depending on the enemy Lighthouse’s capabilities,
the destination could be predicted or sealed,
but such Lighthouses are not common among E-ranks.
Also, if the Lighthouse is destroyed before that... ^^

Then please enjoy this week as well,
and see you next week.

Retrieved from "https://towerofgod.fandom.com/wiki/Vol.2_Ch.100:_30F_-_Closure_(6)?oldid=153092"
Community content is available under CC-BY-SA unless otherwise noted.