20F - Bath (1): This is the ninth chapter of Volume 2 of Tower of God. It follows the Regulars as they settle into their rooms and go take a bath together, while Love reports to his superior Augusgus.

Since Viole does not want any team mates, Love proposes a game. If Viole wins, he will be able to proceed alone despite the rules; however it will need time to prepare so Love sends all the Regulars through to a resting area.

Love meets with his boss, the 20th Floor test director Augusgus to inform about Viole's FUG origins. Augusgus tells Love not to interfere and to abide by the absolute rules of the Tower. Love refuses and is promptly punished before he leaves the office.

In Yihwa's room (601) she worries about whether or not to team up with Viole given her family is one of the Great Families and that joining him may get her disowned; however she does not want to further shame her family by failing the test again. The door opens and she goes to greet her new roommate only to find out that it is... Viole! She assumes than because they were given the same room, Viole must also be a woman and she suggests that they go to the bathing area. As they walk, Yihwa argues her case to be one of the people that Viole select to pass the test with. When they arrive she realises her mistake as Viole enters the male area rather than the female one.

Akraptor and Horyang, while being massaged are discussing what it would mean to team up with Viole. Both seem okay with the idea of being considered enemies of Zahard, if it allows them to continue their climb. Horyang questions Akraptor's motivations in attempting to vote out Miseng, suggesting that maybe Akraptor did not want to fight Miseng and that his claims about having a daughter may be true. Akraptor evades the question and counters by suggesting Horyang has a crush on Goseng.

Akraptor, Horyang, Nia and Wangnan meet up in the bath. Wangnan and Akraptor have a little banter before Prince enters with Lurker and Rapdevil; Prince suggests going to the other bath rather than sharing it with the four 'low class' Regulars; however Wangnan advises against it, motioning to the other bath where Viole is soaking.

Prince and Rapdevil join Viole; since Lurker is intimidated, he joins Wangnan and company. Viole on the other hand ignores Prince as he rants, instead asking Rapdevil if it is true that he defeated Hatsu, to which Rapdevil says yes. Viole exits the bath after suggesting that perhaps one day he might be shown 'the devil' or Rapdevil's true strength.

Wangnan and Nia exit the bath and Nia goes back to their room as Wangnan looks around desperately for his ring, only to find Viole standing behind him holding the ring which bears the symbol of the Zahard...

From instant coffee to fried chicken 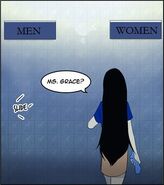 Bonding in the bath.

Friend or foe?
Add a photo to this gallery

I'm looking forward to seeing you.

This chapter would be about the backstories of various characters.
Akraptor’s Princess Maker
Yeon’s klutz series
Wangnan’s dramatic past..


It became long because many stories were put in,
So I was worried that it would have been boring to read.
It seems non-action scenes are losing their meanings.
A hard problem to solve.


Wangnan’s survival seems to be the biggest thing in Season 2.
Will he make it? Or will he die? Stay tuned!
…
Sorry, Wangnan.


Thanks to Ha Il Gwon-nim who let me use his character from God of Bath.
and congratulations on your marriage!


...Why does everyone seem to be getting married.