20F - The Strongest Regular (3): This is the eighth chapter of Volume 2 of Tower of God. It follows Viole as he is allowed to pick his teammates, but refuse to do so, which ends with Viole and Love having a game to solve this issue.

Contradicting everyone's expectations, the person who obtained first place, Viole, will select the other 7 who'll accompany him, rather than the top 8 performers in the previous test. Wangnan, Akraptor, Horyang and Miseng each try to appeal to him before Yihwa tells them off. Wangnan and she get into an argument over her qualifications to pass, before Viole says he will not choose any teammates and asks Love to fail everyone, so that he can proceed alone. Yihwa protests and Viole reintroduces himself as a Slayer candidate for FUG, which is why he says no one else is qualified to be his teammate, as he is their enemy. Love says that the rules cannot be changed, but then proposes a game between Viole and himself.

Wangnan makes his case to Viole 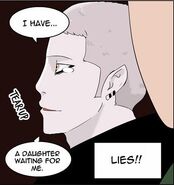 Love is modeled after Hyun-jin Ryu.
But, the more I look at him, the more I feel like Yoo Chang-sik...

Well...here it is, without fail, Tower of God.
Chicken Love's model is the baseball player, Ryu Hyun-Jin.
However, it is not that kind of chicken.
Please don't mistake them.

This chapter's contents were a bit long, right?
I know I said no sudden increase in length a few weeks ago,
But it doesn't seem to be going the way I want it.

When you make a comic that's over 100 panels...
You eat lunch at your desk.
I literally ate rice wrapped in dried seaweed (with nothing else).

Really, I do want to find some assistants,
But I don't have the ability to pay them fair compensation
So I'm holding off on that.
I could probably put them on other projects,
But at the moment, I want to focus more on Tower of God than money...
Well, my situation's a bit better than the old days,
So I don't think I'll be hiring anyone just yet.

Anyways, please be careful of catching a cold,
And let us meet next week in good health.

P.s. I made a twitter, but I'm not telling.
P.s. 2 - Those with girlfriends or boyfriends, go become sick. Don't come out to see the spring flowers. I get cranky because the roads get blocked up.

Retrieved from "https://towerofgod.fandom.com/wiki/Vol.2_Ch.08:_20F_–_The_Strongest_Regular_(3)?oldid=149000"
Community content is available under CC-BY-SA unless otherwise noted.