20F - Last Chance (5): This is the fifth chapter of Volume 2 of Tower of God. It follows as the elimination test ends and we meet the other Regulars that passed the test.

The smoke from the blast clears, revealing the FUG member crouched over, with a strange red lobster-like apparition clutching his head and back. Eventually he stands up without wounds - only to have the bell ring and an elevator open up; since no-one wants to travel with him, he is sent up first and the others follow later.

Having passed the first preliminary test, Akraptor, Horyang, Miseng, Goseng, Wangnan and the FUG member are waiting for the other entrants to arrive, when the deliveryman Nia arrives with several other rather passive looking Regulars and a final group consisting of a dark haired beauty and a guy who won't leave her alone, among some rather impressive looking Regulars.

Meanwhile, the FUG member is having a flashback about the story of a man building a tower, as told by Rachel to Baam. Our Season 1 hero returns.

The man who loved the star 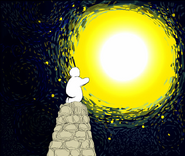 No candy for you 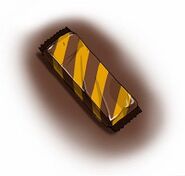 Looks like Ms. Arsonist appears again.
I may throw away male characters easily, but not female characters.
Because I am the knight of females everywhere
I'm joking.

I'm sure it's the same for black-and-white manhwa, but even more for colour manhwa,
It gets a lot harder as the number of characters increases.
In ToG, there are a lot of characters appearing, and they're also changed quite often,
So it gets a bit hard during work.

My tablet broke during the drawing of this chapter.
I suffered quite a bit T.T
I ended up spending two nights in a row to finish; it was hard.
Man, I keep going on and on about difficulties.
Hu... sad...

Anyways, next week will have even more characters to draw...
And my wrist will hurt even more...
And the amount of content will probably decrease...
And my ratings will go down...
Ah... sad...

Anyways, please read the next week's a lot. I'll be very thankful.
See you next week~

Retrieved from "https://towerofgod.fandom.com/wiki/Vol.2_Ch.05:_20F_–_Last_Chance_(5)?oldid=148997"
Community content is available under CC-BY-SA unless otherwise noted.