The two powerful Regulars team up against the mysterious assailant, only to find out, that he is simply too strong for them.

Having defeated the pair, he turns to Ja Wangnan, who tries to defend himself with Shinsu Bombs. When his tactics fail, Wangnan falls back on his normal explosives, which actually seem to wound the enemy. Akraptor urges him to finish the man off, but before he can, a red lobster-like exoskeleton emerges from the mysterious assailant.

Gotta dodge them all! 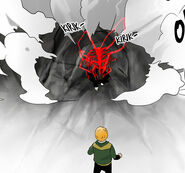 What is it? A delicious lobster.

Mm... a lobster has appeared.
I really like seafood.
Probably because I live in the inlands...
But seafood is delicious!
A bit expensive though...

Part II’s first episode pays a lot of homage to classic Shōnen manhwa.
Since I don’t really have a set genre for Tower of God,
It may feel like different genres at times.
I plan on changing themes with each new episode.

So is this episode going to be like Shōnen?
Actually no,
You can probably tell, but the problems presented are more associated with people in their 20s and not 10s.
That’s why the Floor is also the 20th.
But I still want kids in their 10s to enjoy.
So I’ll try to limit the presentation of age differences.

Next chapter will have more characters,
And it looks like we’ll officially start our story.
So please look forward to next week.
Thank you, ^^

P.s. – Visitors to the blog surpassed one million, yaay.