20F - Last Chance (3): This is the third chapter of Volume 2 of Tower of God. It follows the Regulars as they try to take down the mysterious person, but they are not able to.

The silver haired man gets irritated by the long haired, black clad man's claim that he would 'drop them' all, pulling out an umbrella he points in his face, which quickly results in a fight which the large man attempts to stop, only to be dragged into what becomes a three-way showdown.

Ja Wangnan silently cheers them on before the mysterious figure unleashes a fury of blue-black shinsu, sending the other two flying. Goseng recognizes the symbol on the black uniform he wears, which belongs to the criminal organisation known as FUG. The others are wondering whether they are doomed as the tenth Regular shows up in the room, only to be instantly KO'd by the young member of FUG. 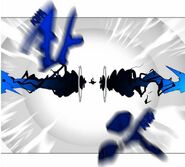 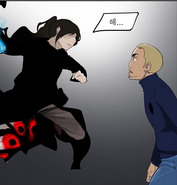 Is his hair glued to his forehead?
[2]