20F - Last Chance (2): This is the second chapter of Volume 2 of Tower of God. It follows Ja Wangnan as more Regulars arriving without anyone being eliminated, this is until the mysterious person announces that he will eliminate them all.

As the Regulars arrive, the mighty "Prince of Zahard"... backs down and does not attack a single one. As more people come in and tensions rise, things look set to explode, until the mysterious person announces that they will all fall by his hand. 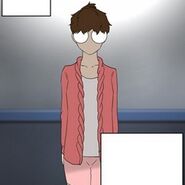 Cause killing someone who's wearing casual clothes is ok. 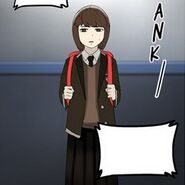 Stay calm, it can probably smell fear.
Add a photo to this gallery

This is Chapter 2.
I guess you could say this is the chapter for introducing the characters of this episode.
The focus is less about progressing the story and more about introducing characters.
It's the commonly used technique of using up a chapter in manhwa, haha.

If the characters in Part I generally represented the upper-class members of the Tower,
Then this episode's characters will be representing the middle-class members.
Still...compared to Part I, their pure combat prowess will be better.
Of course, you still can't compare them to Androssi's strength or Khun's brains ^^;

Truthfully, when I started Part II, I wanted to show a more experienced and composed self,
But I'm still lacking and worrying alot.

So please love the characters of Part II,
And thanks again for reading Tower of God (and visiting me in the blogs). ^^
[2]

Retrieved from "https://towerofgod.fandom.com/wiki/Vol.2_Ch.02:_20F_–_Last_Chance_(2)?oldid=148994"
Community content is available under CC-BY-SA unless otherwise noted.