Volume 2 - Prologue: This is the prologue of Volume 2 of Tower of God. It shows Yuri visiting Repillista, where Yuri asks for Repillista's help with finding Baam.

In Zahard's 5th Floating Castle, Yuri is on her way to meet her older sister Repellista Zahard. On the way, she meets another one of Zahard's Princesses, the extremely haughty Khun Maschenny Zahard. They have a brief argument over the 13 Month Series weapons they both have in their possession, when Yuri complains about all the fuss people make over the Royal Family of Zahard.

Afterwards, Alumik Edrok, Repellista's butler, states that they get along so well, and offers to make tea. Maschenny bluntly refuses and takes her leave. Yuri then continues to Repellista's room, where she asks for help in finding Baam, due to him being "a total hotty". Repellista accepts, with the deal that Yuri would find an object of value for her in return. When Yuri leaves for her hot chocolate, Repellista, awaiting the return of the Prince of Zahard, anxiously buries her face in her blankets as her Opera and countless lighthouses lined up simultaneously. 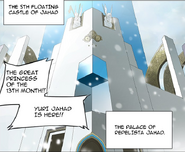 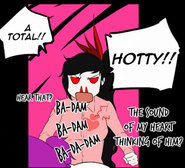 Us, waiting for the next chapter.

Thank you for getting me to Volume 2.^^

So it's begun. I'm more nervous than the time I started Part I.
I had a lot of worries about Part II,
But I'm hoping that everything will turn out to be good.

1.
Part II will be divided into multiple episodes.
The first of those will start next week.
I might take a small break after each episode,
But nothing is set.

2.
Officially, Zahard has no prince.
[TN: I interpret “Officially” to mean “On record” or “Widely-known”]


5 years in the Tower is not long at all,
But it's enough to change a person. Lol