An Unnamed person that hails from the Po Bidau Family.[1]

He has the same hair colour as Po Bidau Gustang, and also light-skinned. He wears glasses, a white fur hat and also wears a robe.

He is loyal and highly respects Gustang. He refers to himself and the Army of Zahard as insignificant creatures when compared to him. He claims that Gustang has an omniscient intellect. 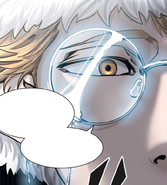 The Po Bidau member teleports out of the giant floating ship and orders the army to give the hostages and told them that he (Gustang) does not need to ask for permission because he possess an omniscient intellect and he can take whatever he wants.

He then tells the Army the reason for his presence and orders the army to tell King Zahard that "A Rift has begun to form".