The Hand of Arlen

The Hand of Arlen

Possibly during Age of Ascension

The Hand of Arlen (아를렌의 손, Aleullen-ui Son) is part of what was once a massive statue or structure (possibly an Altar built to worship "Arlen Grace"). This structure is located behind the Tent Village[4] on the 28th Floor. It resembles a gigantic stone hand rising out of the ground.

The hand of Arlen had been blown up into pieces after Xia Xia detonated a large amount of explosives trap that she set up for her assassination attempt towards Khun Aguero Agnis as part of her mission under FUG's order.[1]

The Hand of Arlen are the remains of a huge stone statue that was broken. It used to be a base for criminals, but it got cleaned out by the authorities some time ago and is now deserted. Because of it, the area surrounding Arlen is infested with traps and monsters such as landmines and Stone Dolls. The Devil of the Right Arm "Beniamino Cassano" once refuged in this structure.

At some point in History of the Tower, King Zahard and 10 Family Heads destroyed a massive statue or structure (possibly an Altar built to worship "Arlen Grace") to erase everything about Arlen's existence in the Tower. Although the massive statue was broken into pieces, the "Hand" part of the statue remained intact and stood upright.

More than 6 years after the 2nd Floor event, where Twenty-Fifth Baam was forced to become the new FUG Slayer Candidate "Jyu Viole Grace", Team Tangsooyook and Viole himself arrived on the 28th Floor. Short story, Kang Horyang decided to quit Team Tangsooyook because he wanted to meet his old friend Beniamino Cassano who is rumored to hide in the hand of Arlen. At the same time, Khun Aguero Agnis who also wanted to hunt Cassano, brought two member of his team Novick and Khun Ran into the hand of Arlen. It turns out that FUG was actually trying to assassinate Khun Aguero in this place. The assassin is Snakeman. Khun had fell into the trap set by Apple, his own team member, who is actually a Regular worked under FUG and had infiltrated Khun's Team. Khun Aguero survived this first assassination attempt because he wore a small Armor Inventory on his chest.

Meanwhile at the Regular Residential Area, Viole quickly departs to bring back Horyang, leaving all Team Tangsooyook behind. However, Ja Wangnan, Hon Akraptor, Prince and Yeon Yihwa who eventually find out why Horyang disappeared try to catch up with Viole shortly after. Viole then arrived in the Tent Village, he met with Xia Xia who then accompanied him to the hand of Arlen. After Viole and Xia Xia enter inside the hand of Arlen, Horyang had fell unconscious because Cassano disabled his power. Novick and Khun Ran ended up being a target of Viole's rage because of misunderstanding between all of them. In the middle of the fight, Khun Aguero Agnis arrived inside the hand of Arlen, making Viole shocked.[5] It turns out that Xia Xia is also a Regular who worked under FUG and she also was assigned to assassinate Khun Aguero by blowing up the hand of Arlen.[6][1] When Xia Xia finally detonated the explosives trap that she set up, she used Stone Doll technology to escape with everyone present in the hand of Arlen, except Khun Aguero. However, Khun Aguero once again survived the assassination attempt because his Armor Inventory protected him from the falling rubble.[2] 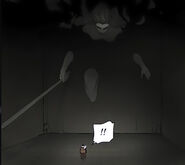 Statue inside the Hand of Arlen. Presumably, this is of Arlen Grace herself 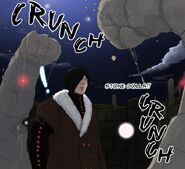 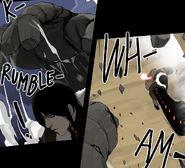 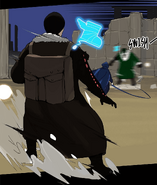 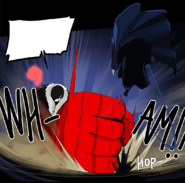 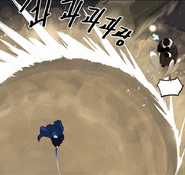 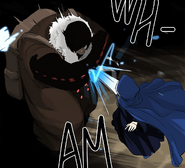 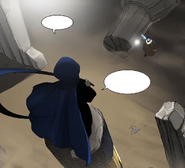 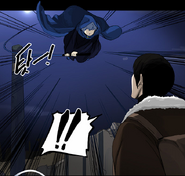 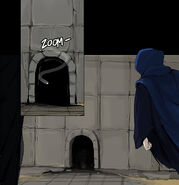 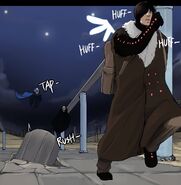