Tebo & Lebo (테보 & 레보) are two beings who are actually one entity. They are a Regular(s?) that participated in the Workshop Battle. Tebo and Lebo won 12th round of the event "Plug". They were also the vanguard for gambler Hyun Chu.[1]

They come from a tribe where members split their bodies onto two halves, in order to increase their survival rate. The halves must always face each other. In Tebo and Lebo's case, the yellow one is always on the right and the blue one is always on the left. This means that only the left side of the yellow one and the right side of the blue one are real. The other half of each are fake. They shoot shinsu blasts at their opponents. As a result, if they are attacked at their blind side, their reaction time is reduced drastically.[1] 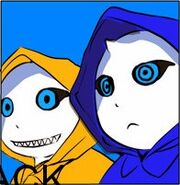 Tebo and Lebo took part in the twelfth group in the Battle x Gamble round. Not much was said about them, apart from the fact that they won the round.

Tebo and Lebo were Hyun Chu's Vanguard in the Developing Tournament. They engaged in a battle with Ja Wangnan, hoping to win 500,000 points, but were defeated instead, due to Khun's intellect and Wangnan's bravery.