Suspendium (부유석, 浮游石, Buyuseok; or " Buoyant ore"; or " "'Float Rock'"") is a mineral found and used in the Tower. The higher the purity of Suspendium, the better it floats in areas of high shinsu density/viscosity. The purity level of Suspendium might be one of the factors used for the ranking and grading of certain items.

Pockets, Inventories and Lighthouses contain different purities of Suspendium.[1] Rachel's chair might also contain a certain purity of Suspendium so she can manipulate it, to move in the direction she wants it to.[2]

It's possible heavier and larger items require greater amounts of Suspendium with higher purity are required to make it float. Except for items like the Opera and possibly Eyes of God, all objects which are capable of floating (without shinsu manipulation) are smaller and lighter. Examples are: Arms Inventory, Pocket, etc.

Other examples can be found in the vehicles throughout the Tower. Flying ships or crafts that are equipped with suspendium is called Suspendship or floating ship. A suspendship at least need one big suspendium to make it fly. Depending on the suspendship's design and weight, the required suspendium will vary in size. Some crafts have one, two or more giant suspendium equipped such as Archimedes, and other crafts have smaller suspendium. The examples are such the crafts used in the 28th Floor by Team Tangsooyook. On the 21st Floor, Team Tangsooyook also boarded a large hovercraft. 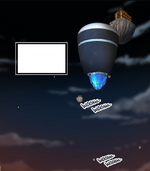 Another examples can also be found at the artificial island. This artificial island is called the floating island. Artificial here means that the structure of the island has been reconstructed and currently equipped with suspendium that allows the island to fly or floating. Since the purity of the suspendium required for the construction will most likely way larger than the vehicles, the price and value of the floating islands are very expensive to buy as stated by Ha Ruda at the Lo Po Bia Elaine's auction that; "with 10 billion points you could buy a whole fleet of floating island"[3], indicating that the price will be at least billion of points.

The name Suspendium is a translated version and the Korean name given for this material would not be able to properly translate into English.