Spells (주술, joo'sool, or "Sorcery", "Enchantments", "Charms", or "Incantations") [1] mysterious power that has existed from the very beginning of the Tower. A person who can master many spells can be granted a special title of "Sorcerer".

Spells are considered to be a mystical power that has existed before Zahard and his companions entered the Tower. Such power is governed by several laws. So far there are three rules the user must abide at the moment of using a spell:

Because of these rules, some spells can be broken or neutralised by a higher ranking spell. Thus, items such as the 13 Month Series considered to the "Ultimate Spell Item".[2]

Over the course of the series, spells have shown to have a number of purposes. For example, Hoaqin once cast a spell that allowed him to combine the power of his siblings and assume a new identity as White. The enchantment on the 13 Month Series is a spell so powerful that not even the Floor Guardians can break.[2] Zahard also placed a spell on the 13 Months Series so anyone who ignited more than one of them would be possessed by the Ghost of the 13 Months, the spirit of a vengeful failed candidate of Zahard Princesses. Together, Grand De Jah and Grand De Sah, with help from Po Bidau Gustang, managed to create a space on the 43rd Floor known as the Spirit Room, where the souls of the citizens of the 43rd Floor reside, in order for people to live forever without ageing despite the harsh conditions of the Floor.[2] Such spell was strong enough that Gustang commented breaking it would be difficult even for him. Regulars can also use spells, as Anna, Levy, Sachi Faker and Yool both incorporate them into their fighting style. Also, items such as the Bell of Dawn and the 13 Month series are considered to be enchanted items.

The bases of the 10 Great Families have their walls protected by a powerful spell that is impervious to any physical or Shinsu attacks and can only be cancelled by Zahard and the 10 Family Heads.

An individual using a Spell 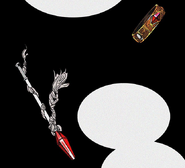 A ritual to cast a spell