Leesoo is a normal-looking person with dimples on his cheeks and close-cropped hair. He is always wearing a purple jumpsuit.

He is a bit scared of all the really strong Regulars competing against him, but is quite enthusiastic about the tests (when he's not scared) and has shown strength in difficult times. He is also more loyal than most, as he has not shown any signs of wanting to betray his teammates yet. He is a fairly righteous man.

Leesoo also helps Khun devise strategies as per the Crown Game and the Final Examination, though Leesoo is always used as Khun's pawn.

Leesoo looks like he is wearing the same outfit as he did in Part I, however, with closer observation, his jacket now has a zipper on the front. In the Workshop Battle he wears a grey informal jacket with his hands often in his pockets, also been seen in the swimwear in Archimedes piscina. His face is also more angular and less spherical than when it appeared in Part I.

Leesoo adopts a much more serious attitude in relation to how he was in Part I, became the leader of his team, is an excellent strategist and a very fair man. 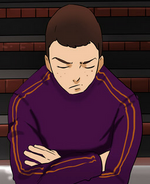 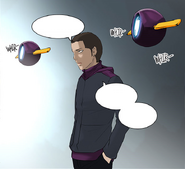 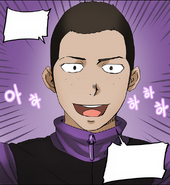 Retrieved from "https://towerofgod.fandom.com/wiki/Ship_Leesoo/Appearance_and_Personality?oldid=139730"
Community content is available under CC-BY-SA unless otherwise noted.