Sanchez (산체스, Sancheseu) is an Army Commander for Hell Joe. His nickname is "The Piercer".

Sanchez was an underling of Grand De Sah. When Hell Joe overthrew the ruler of South City, Grand De Sah, Sanchez joined him in the rebellion.[2] After this rebellion was successful, Hell Joe appointed Sanchez as one of the Army Commanders. His title is "The Piercer".[3]

Similar to his counterparts, he wears a black robe along wish a white mask and brown scarf.

He respects Hell Joe as his master, and urges him to not take Karaka's deal, as he thinks Karaka is playing Hell Joe as a fool. He also seems to enjoy fighting, as he wished he was chosen to guard the entrance for intruders instead of his fellow Commander. 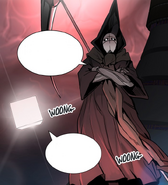 With Karaka's new offer being set, Hell Joe asked his Army Commanders on whether he should believe Karaka's words. The Commanders had differing opinions on whether to trust Karaka or not, with Walcott saying they should give him a chance. Hell Joe then announced to everyone on the Floor of Death the false revelation that the final piece of the Thorn was in his castle and if they wanted it, they should challenge him and his Commanders.

Waiting on top of one of Charlotte's Lighthouses, he complained about his position and how fortunate Walcott was on the front lines. Suddenly seeing rose vines coming up from below, he was swayed into action. However, after seeing Walcott being unable to regenerate from one of Yuri's attacks, he furiously attacked her wondering what she was. With her effortlessly blocking his strike and retaliating by blasting off his right arm, Sanchez could only look on in disbelief as Walcott was obliterated before his eyes.

His current strength and full abilities are unknown, but it's reasonable to believe he's fairly powerful as he was appointed as one of the "Army Commanders" under Hell Joe. Charlotte comments that he is a Spear Bearer.[1]

He later shows his "true form", to which his body goes under heavy transformation and appears as a giant. He also carries around a scythe-like weapon, which can also go under transformation.