Ruel Mon has light skin and is large in body size. He has long hair and wears a pink hoodie. He has canine ears like the rest of the gang.

He seems to be over fighting and just wants to rest. He didn't know the truth back then when he fought for Baylord Yama against Baylord Doom and trembles when he thinks about how many he killed. The only thing that comforted him after the war was cute girl groups.

He is a big fan of the new star Androssi Zahard who was in Ship Leesoo's team, so that was the main reason he helped Ship Leesoo and Hatsu to strike Doom. 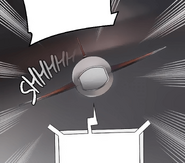 He was introduced inside his room, sitting on top of Androssi pillow merchandise. He then tells his backstory to Ship Leesoo and Hatsu, and then help them to fight Doom because Androssi is in Ship Leesoo's team. After the Unnamed Ancient Spear fails to take down Doom, he ran away to hide.

He ranks 7 among the top in Yama's Gang and was able to harm Baylord Doom with the Ancient Spear using a partial transformation like the other canine people.

Retrieved from "https://towerofgod.fandom.com/wiki/Ruel_Mon?oldid=149653"
Community content is available under CC-BY-SA unless otherwise noted.