Roland is a canine girl who boarded a warship along with Gado, the second-in-command in Yama's Gang.[2] She is a loyal, devoted servant of Gado. Gado refer her as a failure combat dog, indicating that she is also a private bodyguard of Gado.[1] 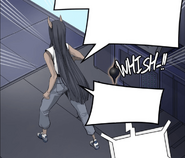 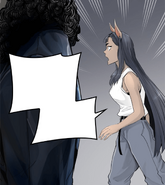 She was seen boarding the ship with Gado on their way to investigate and find out the truth about the real identity of the high priest's attendant (R and his brother) who revealed and said to also belong to canine people. On their way to investigate, they were intercepted by an official warship of the cage which boarded by Canzon and his underlings.[2] Canzon intercepted the ship because he suspected that Gado will be doing a suspicious act after he finds out that Deng Deng was not the real biological son of Gado, after doing a blood test experiment. Roland was shocked by this news and questioned his master if it's really true, but Gado who's secret was revealed, quickly grab Roland's neck and killed her.[1]

Retrieved from "https://towerofgod.fandom.com/wiki/Roland?oldid=124441"
Community content is available under CC-BY-SA unless otherwise noted.