Tower of God Wiki
Register
Don't have an account?
Sign In
Advertisement
in: Characters, Females, Regular,
and 4 more
English

Roen Yuia (로엔 유이아, Loen Yuia) was Aka, Boro, Sachi and Daniel's comrade during their trips and journey on the Hell Express. She was a D-Rank Regular and a Light Bearer.

Daniel was actively seeking a way to resurrect her by awakening Hoaqin, however Clone finally confirmed that there's no way to bring her back alive since Roen is already become a part of her forever.

During Roen's first attempt at taking on the Hell Express, Aka Williams,[2] Boro,[3] Sachi[2] and Daniel were her teammates.[2] During their time on the Train, an unknown Slayer candidate that called himself as Hoaqin gradually killed everyone on-board until, in the end, they were the only ones left.[4] Roen wished to stop Hoaqin's plans, but because of Roen's sacrifice 600 years ago, Hoaqin's plan ended in vain. The moment when Hoaquin's goal was almost achieved Roen successfully completed the "Spell" to sacrifice her own soul to stop Hoaqin.[5] In the end her soul became part of the billions of vengeful souls that forms Hoaqin's final clone after Hoaqin lost his power.[6]

Roen was a fair-skinned young female with long ginger hair and equally orange-coloured eyes. She was seen wearing a pale grey waistcoat over a white shirt with a forest green tie and a similar coloured skirt.

Roen was a confident and kind person who believed that people had to be considerate towards the weak. She also had no time for arrogance and openly called out Hoaqin for asking them to be his underlings. 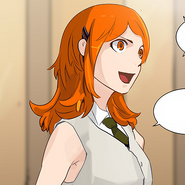 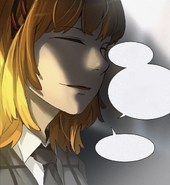 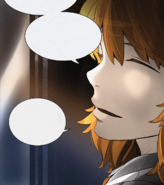 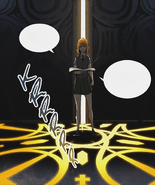 As a D-rank Regular at the time of her death, as well as Boro saying she (and three others) were incredibly strong in comparison to himself,[4] one can assume that she was quite powerful at the time. She was a Light Bearer and could control at least two orange-yellow Lighthouses.[1]