Rocitane is a sly-looking Regular with purple hair and lines under his eyes. He wears a flowing robe-like garment that is a similar colour to his hair.

He is a confident man, believing himself to be able to stop Baam. However his cowardice is shown when he hesitates to confront Hanool as the latter was running with the yellow ball. 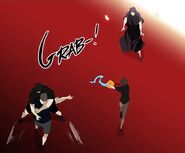 After being picked by Ha Yura as a member of her team participating in the tournament, Rocitane lined up as a defender alongside Brugel, ready for the third round. Hanool and Baam ran at the two and, after the former passed the latter the ball, Rocitane attempted to stop Baam but was overwhelmed, allowing him to get past. Then, in the fifth round, Hanool used the ball's Crazy Mode to unnerve Rocitane, Baam took the ball, shoved Rocitane out the way and then attacked Yura. Ha Yura's team eventually lost the game after Yura's disappearance.

Rocitane is a D-rank Regular with the ability to create two red-coloured baangs.[1] However he was overwhelmed by Baam who used three baangs to take him down.