Yuri performs the skill by first charging red-coloured Shinsu into a small orb in between her hands and then loosing it in one great blast. The size of the resulting blast dwarfs Yuri's size and produces varying sized shockwave rings in its wake. When used by Yuri, the attack was powerful enough to destroy something as tough and sturdy as the ancient Observer, Purple Dementor.[1] 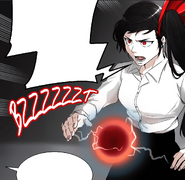 Prepare to fight Karaka
Add a photo to this gallery

Retrieved from "https://towerofgod.fandom.com/wiki/Red_Velvet_Sword?oldid=138899"
Community content is available under CC-BY-SA unless otherwise noted.