Red Greymon is grey skinned and has two red horns on either side of his head. He is fairly knowledgeable about the Name Hunt Station and its Festival[1] but appears to have difficulties with his memory.[2] 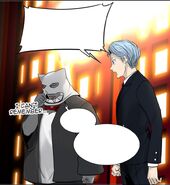 He explained to Viole's team about the Festival of the 'Name Hunt' Station and then accompanied Viole and Khun during their journey through the Festival island and Kaiser's Gallery to take the latter's name. He then watched as Viole took Kaiser on and unhelpfully revealed Kaiser's two trump cards to Khun after Viole experienced both of them first hand, much to Khun's annoyance. He also wondered why Khun referred to Viole by the other name "Baam".