Rak is a very large alligator-like humanoid with grey skin. He has a head similar to that of an alligator, except for the spikes on the back. He is quite muscular and roughly 15 feet (5 meters) in height. He wears red robes/armour, a red cape, (although he has been seen to change into a blue t-shirt) and carries a huge red spear. He is a large, powerful warrior and a very confident and optimistic individual.

After the Hide-and-Seek game, Rak got his body shrunken by Yu Han Sung to around 3-4 feet tall.[10] It seems he goes back to his normal size while taking a test. It is implied that only someone who has the authorization of the Guardian can shrink the size of a person. Sometime after that, Rak becomes a Compression Licensor which gives him the ability to shrink his size at will so he can move around the Tower more easily. 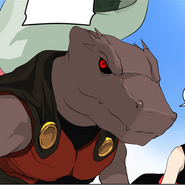 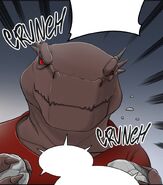 Rak doesn't come off as particularly smart; he thinks he is superior to almost everyone else and so refers to other people as "turtles". He occasionally calls himself "Rakleader" when he is feeling particularly full of himself, although Khun may be to blame for indulging him. He tries to make himself appear tough, although he's actually a bit of a baby sometimes. However, he does seem to have a little of a caring side in him, as he appeared to be slightly concerned for Baam after he was injured badly in the Crown Game. Sometimes he can be more perceptive than you would expect; for example, he was one of the two people who realized that Khun was faking his rejection of Baam before the final Second Floor test in order to get the others to support him and immediately understood the strategy well enough to play along.[11]

Rak refers to many characters of the series as turtles:

Retrieved from "https://towerofgod.fandom.com/wiki/Rak_Wraithraiser/Appearance_and_Personality?oldid=138516"
Community content is available under CC-BY-SA unless otherwise noted.