Tower of God Wiki
Register
Don't have an account?
Sign In
Advertisement
in: Characters, Rankers, Zahard's Army,
and 3 more
English

Powler (파워러, Pawoleo) is a Ranker, Third Tier Servant of Kallavan, and a Regimental Commander in the 4th corp of Zahard's Army.[1]

Powler is a red coloured beast, with two wings that each have two propellers in them. He wears armour and has a feather tail. 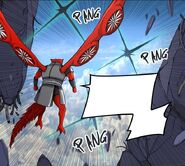 As part of the Advance Team from the 4th Army Corp of Zahard's Army, Powler was sent to the Last Station because of Zahard's Orders. Their mission was to kill everyone on the Hell Train.

When White appeared, Dorian Frog was occupied by him. Powler with Water Jelly and H-14 intervened to stop the Hell Train from entering the Last Station.

Shortly after the capture of White and Karaka, minions of the latter arrived on the 44th Floor to save their master. Powler was then attacked by Death Lady.

Powler has immense physical strength, demonstrated when he pushed the front of the speeding Hell Train and brought it to a stop.