Poro Poe (포로 포) is the Conductor (관리인, Gwanliin, literally "Train Driver") of the Hell Express[1] but he is a Regular and a close friend of Daniel Hatchid.

Not much is known at the current time, but it is known that he attempted to get on the Hell Express for ten years before he ended up working as a train conductor.[1] He also seems to have some history with Daniel Hatchid and also knows who Roen Yuia is.

Poro Poe is a large man with tanned skin, a chubby rectangular-shaped head with completely circular black-coloured eyes, small chin stubble and a wide smile. He wears an uniform and is accompanied by a dog-like creature that looks surprisingly similar to him.

He appears to be cheerful and somewhat concerning character as evidenced by his worry if Daniel had hurt himself fighting the Nirotic guardian. He greatly admires Roen, similar to Daniel. 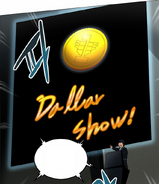 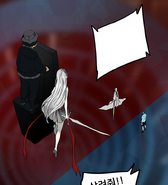 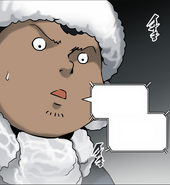 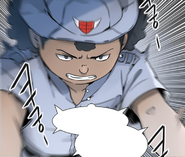 Poe appeared at the platform of the Hell Express and greeted Daniel Hatchid and the rest of Rachel's group. When he noticed that Ha Yura wasn't with them he asked the group where she was, as the Captain of the Hell Express wouldn't leave until she was onboard (as she was the only reason the Captain was helping them). Daniel said she would be arriving shortly and Poro Poe replied that he'd let them all in once she did.

Just as Yura had arrived, Khun Aguero Agnis and his teammates walked out from the elevator and introduced themselves as well as how they managed to reach the platform, which worried Poe. He was then in a flustered state when Khun and his teammates began attacking, but Daniel told him to calm down and to get the navigator so that they could escape. Although Poe was wary since it was going against the rules, he eventually retrieved the navigator and helped Daniel, Rachel, and their allies to successfully escape on to the Train. Before Daniel had got on to the Train, Poe told him he had to resurrect Roen so that they could climb the Tower again.

When Hoaqin went out of the door of the train after it had arrived at the second station, Poe hurried to the train conductor's office to inform him.

Later, when the train came under a powerful electric attack, Poe hurriedly rushed off to see what was happening.

Poe helped in repairing the train so it could leave the Wooden Horse station. He later asked the train conductor why he was making Hoaqin and Viole fight at the 4th stage when they were trying to revive Hoaqin and the conductor explained that the situation had changed due to their actions at Train City.

When the time of the match rolled around, Poe overlooked the game area as the various participants arrived.

Below in the stadium, after Wangnan greets Viole again, Poro Poe explains the rules of the test for the 4th stage of the Hell Train: Dallar Show. During the event he acted as the referee for the three rounds of the Dallar Show: "Catching the Sweetfish", "Transfering the Sweetfish" and the final round "Go to Hell". During each round, he was presented boarding a flying platform as he was supervising the games. During the final round, as the core began to be filled by the boiling substance he was saved by Yuri Zahard.

Following the death of the Train's conductor, Poro Poe took command of the Hell Train as he was conducting the Train to the Name Hunt Station.